Well, 2020 didn't fare well for music, as it didn't for most anything.  I got a lot of ok to subpar disks. Nothing was a home run. And the strongest of the bunch - in albums - were female driven. The majority - in songs - were male.

There is no mathematical equation to my selections. All is in the gut - and how I sing in my car whilst alone. They are songs that might not mean a thing, but caught my attention and kept it. 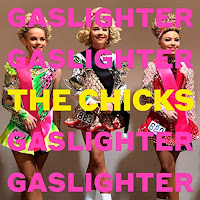 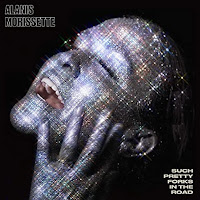 I honestly couldn't come up with a true winner.  The Chicks are there because with Gaslighter they have a very decent, but not great, disk. Granted my expectations, after 14 years, were super high and they didn't meet them consistently. Half the disk is flawless, one quarter is good and one quarter is fair. It was and is great hearing them again, and I'm ok with the veering away from country music, but they need something not quite as produced that show off the women's harmonies.
And no one could be more surprised than I with Morissette making the cut on Such Pretty Forks in the Road. Having never purchased any of her past disks, I found myself coming back to this one time and again. Like the Chicks, it's not perfect by any means. Like the aforementioned disk, I skip a couple songs completely. Isn't it ironic - get it?  - that both have similarly titled songs ("For Her" and "Her" respectively) that I fast forward over?  Again, since I had zero expectations of this, it was easier to exceed them.
In third place, we have Lucinda Williams with Good Souls Better Angels.
Songs
I have three I am directly linking here, two of which haven't made a My Music Monday segement, and a number of others I have.

The Chicks - to me - have the best song of the year with "March March".  It's not like the traditional Chicks sound at all, and after I got over that, I really dug the song. While Natalie Maines' voice is as solid as ever, it's Emily Strayer's slide guitar and banjo, and really Martie Maguire's violin that make the song solid and different (though the vocal arrangement is harder than one would think).
I could have posted the studio version, but with Covid they've been performing socially distanced live music from the audience and each other. While the rhythm track is pre-recorded the rest of the performance is live - on tv and from hundreds and thousands of miles from each other.
Morissette gets a nod too. Two, really. I was torn between "Nemesis" which might be most ambitious song on the disk and the much more catchy, "The Reasons I Drink".  I'm embedding the former and just linking the latter.
Matt Berninger's "Silver Springs" makes the list. It is different enough from his band, the National. I come back to it a lot.
The Killer's disappointing disk had about three playable songs, one being "My Own Soul's Warning". This isn't even the original video. Maybe fans got tired of not seeing the now two sole members of the band in their videos?
And I'm throwing this in here too. I didn't overly enjoy Hamilton.  But I enjoy the opening number enough and was duly impressed by a socially distanced Zoom presentation of it. They really don't suck considering the circumstances.
But I do of the other songs on my list - two or three are Covid related / inspired:
twenty one pilots - "Level of Concern" - possibly my most repeatedly played song of 2020. Have not tired of it in the slightest. Truly Covid-inspired. The use the word 'quarantine' well.   ...as does.......
Ben Gibbard - "Life in Quarantine" - the guy behind Death Cab for Cutie had potentially the first, and one of the best, songs about life in the time of Covid.
Michael Stipe - "No Time For Love Like Now" - another National related song. This is just a demo for an alleged Stipe solo disk, but to me, it's in perfect form as is.
Thao & the Get Down Stay Down - "Temple" - definitely the most non-traditional track of my year. But I love it. Love the bass line. Love the vibe.
Beck - "Uneventful Day" - ugh. I like a song from a Scientologist. So be it. The money he makes from it goes to the great and power Xenu. All hail Xenu.
There are some honorable mentions with the Go-Go's, Cage the Elephant and yes, the Rolling Stones. Two of these three are a little on the nostalgia side.
More interesting to me was that Rosanne Cash, John Paul White & Rosanne Cash nor New Order made the cut. All decent tracks, but not necessarily noteworthy.
Posted by Blobby at 12:07 AM

I totally agree with your top two choices. Fork has been in and out of my car CD since it came out. The Chicks disc was a little too literal for my tastes, but musically impeccable. Great list.