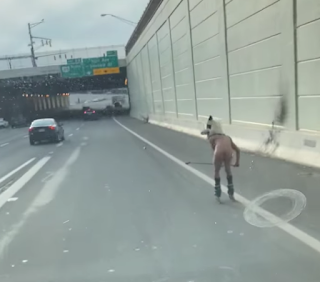 I'm not saying my friend Morty skated nekkid down a freeway, but I'm not not saying it.

Let's look at the facts.

1994 I lent him my in-line skates. Shortly after that I moved from Columbus to go to Cleveburgh, never to see those skates again.

The noted skater was rollerblading, if you will, down I-670 under the High Street cap, right near where Morty and I used to live. He knows the area well.

It's the middle of the day - which normally would throw this out of synch - IF he had a job.

Where would he have gotten the panda head and the golf club? 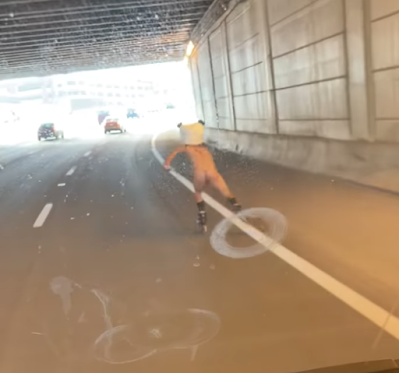 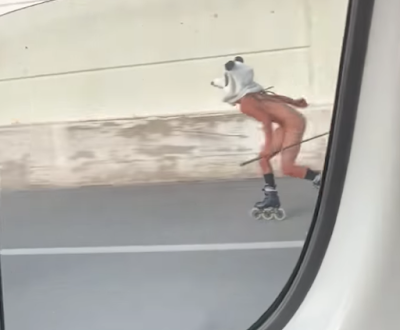 I only hope no overtaking drivers turned round to get a front view as they went past. I would have - who wouldn't? :-)

If Morty was in the mood to shake his meat and potatoes, hopefully it was him. Hopefully he gained something out of it other than frostbite and a public indecency citation. Life is short, hope Morty isnt!

Interesting choices. Why the golf club? In case someone messes with him? I get the panda head. And... do you think he was forward thinking enough to have clothing hidden somewhere at his ultimate destination? Or is the car that is filming this his safe place? I love to think about the logistics of planning such a stunt. Good for him. All that skating? Really paying off for him.

I'll give your skates back now. I've completed my bucket list.

IDK...would your friend morty dare to do something like this? every time you write about him, he seems like a sensible chap.

ouch to the likely fall.