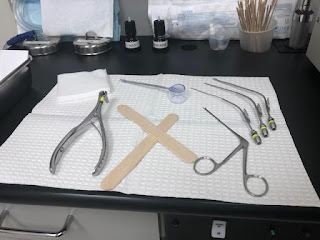 I'm a little more than a week out from my "operation".

I guess it shouldn't be in quotes. There was anesthetic. There were knifes and roto-rooters (I assume). There was prescribed level 3 narcotics, which were filled and not taken. Again.

And there was snot. And blood. And a lot of it. Well...I'm not sure there was.  I'd swipe at my nose at the smallest leakage of anything. It always seemed to have feel like so much more would be there.

The doc had told me early on that I would have a harder time breathing directly after the surgery than before. What he should have told me that worst head-cold thing I mentioned in last week's post.

I couldn't tell if my sinus discomfort was from congestion of blood/snot, whether it was swollen or due to the splints. My actual guess was the correction: a combination of the three.

Doing saline spray hourly (or almost) and doing a neti-pot three times per day helped. It wasn't as gross as. thought it might - though to be fair the first 2.5 days water went in, but not out the other side. I finally got a break thorough.

Bleeding pretty much stopped day two. Long hot steamy showers helped too. And I needed the water to get the blood out of my beard.

Friends, Morty and Don, told me I'd feel like a new man when the splints come out. It didn't hurt - though they did a numbing spray, but that was mostly so they could go and vacuum out the additional snot and blood. And I had prepared myself for the worst, so......it couldn't be as bad as expected. It took all of eight seconds to get both out.

Don and Morty were correct. I'm not sure I've ever breathed so easily. But that is temporarily temporary.

With the splints out - and they were way larger than I imagined - the swelling it kind of held back was now free fill in the empty space. Even with that happening, my breathing was still better than before.

All-in-all, it will take a month for things to be better for my breathing and maybe up to three. I can live with that.

I wanted a pic of the bloody splints, but my phone was across the exam room.

At least now everything in your body or head belongs to you ! Heal quickly Blobby it’s a very unpleasant surgery .

Hmmm. I feel for you. I have terrible sinuses. They get worse each spring. Usually, winter gives me a few months reprieve, but, so far? Not this year. Due to covid, I am avoiding the doctor's and not seeking any medical help... so, every morning, I wake up feeling like I have a brick stuck in my forehead. You're very brave to have gotten the surgery. Hope it relieves your issues. Feel better... wishing you the very best.

if it were I, I would put up with the sinus problems rather than go thru that awful-sounding surgery.

The mental pictures made me wince. I am glad your phone was across the room. :D I hope that you heal soon.

I read these in reverse so I hope you are feeling better by the time I am reading this.