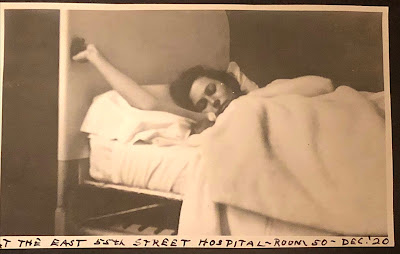 Had my father lived, he'd have been 100 years old - as of yesterday.
Today would have been my mother's 92nd.   ....you know, had she lived.
I don't have any words of wisdom about this. Oddly, I'm more surprised that in one form or another, I think about each of them daily.
Maybe only for nanoseconds, but it comes up. I don't think it helps that on a daily basis I walk the dog past a house where my father lived when he was five-ish.
If I wanted to annoy my mother, I'd tell her I was a probable mistake. If I wanted to piss her off, I'd mention my little sister was a definite one.
710 and I mention longevity often. I've mentioned it here too. Both sides of my family live into their 90s - and above. This does not bode well for me. I have zero desire to live to that age.
There was an interesting article a few weeks back about a man who wanted to live only around to 75. He stopped doing colonoscopies, prostate screenings, flu shots, pneumonia vaccines et al, and let nature take its inevitable course.
All-in-all, it's not bad planning. It's controlled (to a degree) expiration. And it would certainly beat being 94 and all alone.
That all said, I came across a bunch of pics my grandfather took in 1920-21.
My father was their first born. True to his nature, the picture mentions the hospital, the room, the date. Not a word about his newborn son or even his wife.  My grandfather, by most accounts, was kind of a dick. Even as a nine year old, I knew it. However, I've had corroboration.
In the past, this is the evening we'd get together - for my parent's birthdays. Last year, we did it with one of my sisters. This year, again, it will just be 710 and myself. Perhaps we will go stand on my sister's driveway, as it has been months and months since we've seen each other. But before that, I'll drive over to the cemetery just to check in on both my parents.
Song by: Feist
Posted by Blobby at 12:07 AM

What a wonderful piece of writing! Longevity doesn’t worry me , having saved enough to keep myself in the style to which I’ve become accustomed does. My mother turns 89 in March , her mother was approaching 100 when she passed. I think with all the carcinogens and free radicals out there, my mothers generation will be the last to live full term. I’m glad you remember, oral and written history of families is so important. An art lost like quilting and so many other family gifts. Glad you have a plan and persons to spend it with, I am especially grateful to be alive to see another piece of history ,sputter to life ,and get the car- back on the right side of the road!

both sides of my family lived into their 90s. season's greetings to you and 710 and the furkids.