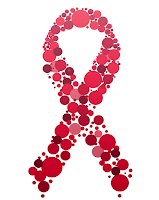 In this year of Covid, it would be easy to overlook the 32nd World AIDS Day day.

However, I think, due to Covid, this is the perfect time to mention it - if not to draw comparisons.

While I think BLOTUS completely bungled - and continues to bungle - anything related to Covid, he's certainly not Ronald Reagan choosing not to publicly acknowledge AIDS for four years and after more than 47,000 deaths. More than 59,000 by some other accounts.

Mind you, Corona hit harder and faster than AIDS. There was no way for BLOTUS to completely ignore it, though he put enough roadblocks in the way for slowing things down. Reagan ignored it completely. At least publicly.

Since 1981, over 35 millions have died from AIDS worldwide, more than 1.2 million in the U.S. Mind you, in a matter of 10 months we have 25% of that from Covid. Depending on vaccine timing, we might surpass 40 years of AIDS deaths in 12 months.

That said, I think the community - the pharmaceutical one in particular - has responded much better due to Covid than HIV. Maybe it is wishful thinking, but one would hope that this is due to HIV. Not so much the disease as the lessons learned during and since.

It also doesn't hurt that Covid isn't considered a gay and minority drug-related disease. Yes, don't kid yourself - no one was rushing to help out us deviants. There was a stigma. I'm sure there still is to a degree.

There are still about 38,000 folks in the U.S. per year diagnosed as having HIV. I'm curious to see how, or if, that decreases in the next year. In theory, social distancing  should have stopped hook-ups, though on the other hand, drug use is up due to the fact that isolation and lack of in-person addiction services are taking a toll on that population.

Of course, what I'd like to see is after Covid is under control - with three possible vaccines ready to roll - is that same effort goes into the HIV battle.

Sure sure - BLOTUS promised he'd end HIV / AIDS. I don't think he aid he'd do with with science, since he doesn't believe in that. Maybe he means he'll stop using his infected dick on others?  That should cut down on lots of infections.

But it's BLOTUS - so his claim to end AIDS is automatically an untruth anyways.

I get the Covid distraction for 2020, but let's hope it doesn't take away from almost four decades of progress.

Haitians ,Hemophiliacs and homosexuals! I remember reading the names at an AIDS day in 1992. I met Leanza Cornett, the first Miss America, who used AIDS education as her platform, unheard of at the time. She represented Florida, and died from a fall this year. I volunteered at an AIDS service Organization and lived the the hate of the Reagan Years. Yes, Blobby if little gray haired grandmas were the primary target, I believe there would be a Vaccine today. Bless all who have suffered and died and say their names Today.

all the names on the AIDS quilt...what could they have accomplished if they were not ignored by ronnie raygun and his toadies?

Thanks for highlighting the day. History is very important, as it informs the present. One would think that, in light of our Covid isolationism, STD rates may be at risk of a rapid rise once the vaccine becomes commonly used. But, that would depend on the rates that are current, during the Covid crisis. Did we see a dramatic decrease in the amount of STDs/STIs during this period of isolationism, or did they remain the same? I would hope that there would have been a dramatic decrease - but whether that is proof of less spread or merely people more reluctant to seek medical attention... hard to say. In any event... any dramatic increase would need to viewed in light of what I am assuming is a decrease. Statisticians who throw around percentage increases? Always suspect.