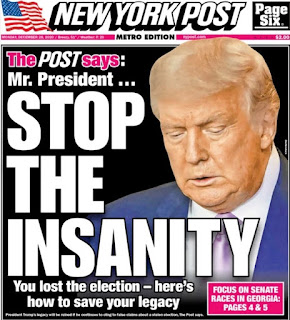 Well, I'll be damned (and I probably will be...........but not for this....) !
When Rupert Murdoch & Co print this, you kind of know you're fucked.
Naturally, they kind of lose me on the "legacy" part, as they infer up until now, BLOTUS would have had a good one.
Actually, they almost lost me at "Mr. President".
Seriously Rupe, stop THAT insanity.
Now, BLOTUS has been railing against FOX "news" for the last few weeks (months?) because they're not only not blindly supporting him 100% of the time (though they still do a fuck a lot of the time), but the network has even gone on record to walk back false tales they have told.   .....in order to avoid a huge law suit.  One not brought on by bottled blonde anchors. Allegedly.
Yes, FOX had to say take back all the nasty claims they made about election fraud in terms of certain voting machine companies.  And this was months after, at a trial,  lawyers for the network argued that no "reasonable viewer" takes the primetime host Tucker Carlson seriously.
But by all means, let's call everyone else "fake news".
So, Murdoch might have cut off his nose to spite his face with this. But no worries, Jerry Hall will still love his billions of dollars him, regardless!
January 6th is coming up. Proud Boys have already taken over a hotel in Downtown DC, and there is more than speculation that BLOTUS will rile the troops to impose violence. BLOTUS has that power, but oddly enough, he hasn't needed it - as these twats are gonna do it without the Orange Jim Jones telling them so.
Ironically enough, that time of potential violence could be more hurtful - literally - to #moscowmitch, as right now the head of the Senate gets to take care of approving the Electoral College votes.
This might be enough reason for him to want both GOP folks from Georgia to lose the day before. His head won't be on the block - literally - should he not have to be the one to make that approval.
I'd say I'm not a dick - but I think we all know this isn't true - but I wouldn't feel the slightest thing if something happened to Mitch, physically during turmoil in DC.
Alas, I'm sure Mr. Murdoch's words got through to BLOTUS and now all will be well.
(insert eye roll emoji)
Song by: Oingo Boingo
Posted by Blobby at 12:08 AM

Besides the fact that DonaldTrump ,is the worst , most vile, incompetent aberration to ever climb out from under a rock, Whats New! We know that in a perfect word Joe Biden should have taken office December 1st . We know Popular vote should be our means of election. Trump, I’ve never considered him anything, with US in it, Is all about me. One more hurdle about a week away. Then it’s onward and he is gone. I don’t acknowledge him anymore because I have no energy and refuse to let him have any power over me. I refuse to give up days of my life but I limit my media involvement more and more , and it was small to start!

HOW in the hell did bitch mcturtle get re-elected? stoopid KY voters!

the dump's legacy will be the 330K+ (and counting) dead citizens due to HIS failure to act on the COVID pandemic.

Interesting development. Glad Dominion is standing up to this nonsense. The GOP and Trump should be sued by everyone they have slandered. Would serve them right. Irresponsibility on such a grand scale should have visible consequences.

Rupert Murdoch is a cunt - fact!

I must say, I wasn't expecting Raybeard's comment. But I won't lie about loving it.