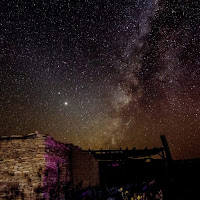 Jupiter and Saturn are gettin' busy!!!!
For the next three weeks you should be able to see both in the sky. This has not yet happened for Blobby, as the mornings have been cloudy.
My early morning (read: still in bed for most) with Shep, I get to see all kinds of stars and planets, depending on the time of year, the tilt of the axis and total luck of the weather gods.
On the 21st, both planets will be at their closest point since the year 2000 - as their orbits align every 20 years. The conjunction will have them looking a double planet - appearing to overlap  They come within 0.1 degrees of each other - even though they are ~402 MILLION miles apart.
The fun thing with all of this?  Weather permitting, this will be able to be observed anywhere on the planet. Ours, that is. Well - this one. Some of you might dual citizenship on other planets. No judgement.
This degree, or almost lack of, hasn't happened in over 800 years. And it won't happen again until around 2400 - though in 60 years, they'll come close. I don't plan to still be around of either of those two.
Song by: R.E.M.
Posted by Blobby at 12:07 AM

fascinating, captain. let's appreciate it while it's here.

My mother is a student of the stars and planets! She will love this!

I rarely get to star-gaze. Light pollution. But all one has to do is look up some nights, and it gives you the perspective needed. We are all such a tiny part of something so much larger.

every night when Harper and I go walking we look for these two planets they are old friends.