How Can You Mend a Broken Heart ? 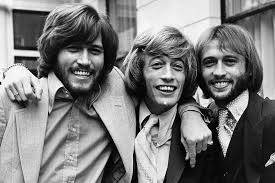 As I alluded to in my 12 of 12, we watched the newly released Bee Gee's documentary, How Can You Mend a Broken Heart? on HBO this last Saturday.
As this is 2020, this is counting at a "movie".
I don't know exactly how revealing it was, or perhaps it might be sadder to say, I knew more about the band than I thought, so there was little new here.
You can add Saturday Night Fever to the movies I've never seen. Sure, I've seen parts of it, but never the entire thing. It didn't interest me. If I hear "Staying Alive" my mind usually goes to two Girl Scouts fighting it out in Airplane, or a CPR scene in the Office.
As you'd expect, the filmmaker, Frank Marshall - who was (is still?) a producer for Spielberg - covers beginning to now. The end of the Bee Gees goes back almost two decades with - spoiler alert - the death of Maurice Gibb.
I wasn't a fan-fan, but I liked some of their earlier stuff. But it was 1975 that changed the band. Barry - fortunately, or un - that doing a backing vocal for "Nights of Broadway",  found his falsetto. For me, the annoyance would be forever after.
I get using it now and again, but Robin already always used one, though not to the degree or power that Barry did, but from the next disk on, it would be continual and overly distracting - at least to me.
With two of the three brothers dead - along with sibling, Andy - a lot of the footage used is archival. So, How Can You Mend... is better than, say, a VH-1 Behind the Music, but you get the vein in which it is set.
Honestly, I think the biggest surprise I had with the entire thing is that for a short time, Maurice was married to Lulu.  Who knew?
So, if you have HBO, feel free to catch it, but I wouldn't say GET HBO to watch it.
2020 Movie Count / Goal: 12* of 18
*Only the 11th movie I have written about. I did not review the documentary on Michelle Obama, though I recommend it to all.
Posted by Blobby at 12:07 AM

Lulu, thought she was the greatest thing ever “To Sir, With Love” , Sidney Poitier. All those horse faced Gibbs Andy died early he was the cutey. It’s not the Eagles and wasn’t any where in the time frame . Disco Boys I guess! Sung with Streisand at least one did! Definitely the world of music is better they were here , not so much for some!

i did know that Maurice and Lulu had been married for a short while. I even remember their wedding featuring on the news, but then at the time I was already in my 20s whereas you were a mere nipper, or maybe even younger. The reason why they split was always a bit of a mystery which no one talked about it - until two or three years ago there was a TV documentary on the three bros, revealing that Maurice had had an alcohol problem which Lulu saw and made Maurice promise that he'd stay clear of drink when they hitched. He couldn't manage it and his regular drunken rages led to her give an ultimatum. We can fill in the rest.

I'd like to see this film. I think it's been on TV here but only so far on satellite channels. I've always been somewhat ambivalent about the group themselves, certainly impressed by their song-writing abilities and a long-lasting, world-wide appeal, the scale of which very few other groups have achieved, yet I wouldn't go very far out of my way to listen to their numbers or see them on film. But this I'd like to catch if only in 'swansong' terms. - their own swansong through circumstances, not my own.

Love all the various stages of the Bee Gees. Adore the drama of Nights on Broadway. It was rare that they released an entire stinker. They lost their way a bit, post disco boom... but I liked the adult contemporary sound they eventually found. Andy will always remain a mystery to me... so much potential. Granted, his music was actually he brother's, but he had more charisma and really should have been an actor, as well. But he was too undisciplined and drug addicted. Sad. I knew about Lulu. Did you also know she had a song or two produced by David Bowie? True. Lulu got around. So there was an 8 track player in the cafeteria of my high school and senior year - for the whole year - an 8 track of Main Course got stuck in the player and that is what we listened to for a whole year... even though it was a few years old at that point. People came to hate it... but not me.

@james - barry and babs sang together, and apparently had a fling too.