Everything Reminds Me of Her 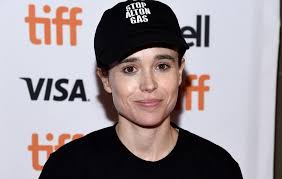 Yes. the post title and the associated artist are all a little bit tongue-in-cheek. It's all good.
It was nice news to hear about Elliot Page announcing himself as trans, if not unexpected. When he came out a few years back as a lesbian, I was less than shocked. This threw me - I won't lie.
I can count on two and one quarter fingers how many things I've seen him in. Let's be honest - I wasn't fully invested in anything X-Men related, especially if Academy Award winner {cough cough} Halle Berry was involved. But I loved and love Juno. And I liked Inception.
You gotta figure between a few Marvel movies and a Christopher Nolan film, he might have made bank. I'm hoping so. Though work doesn't seem to be an issue, as he is in a Netflix series and they said he'd be in the next season. I'd say 'how?' but you know, I didn't know there was a Netflix series to being with, so....I'm not quite on top of things.
Elliot was correct to call out the nervousness due to violence associated with being trans. Glad the focus wasn't all his and that the community itself was brought into this - as it is important for anyone who will listen to hear.
This was all better than hearing anything about Bill Barr saying "the right thing". He's either the conduit (not Gary Conduit) for the administration getting as close to conceding as it's gonna happen - or he's getting fired tomorrow. Possibly both. Either way - I'm ok with it.
Song by: Elliott Smith
Posted by Blobby at 12:07 AM

Although I knew the name I wouldn't have recognised his face in anything. Will look out for it in any future film whenever I go again, which at this rate may well be never.
I'm with you on 'Juno' and 'Inception', though I'd switch my preferences around, liking the first and loving the latter. Actually, I'd now go so far as to say that I think 'Inception' could well be my very favourite film of the last 20 years, easily one of my top five - personal choice, naturally.

I’ve come to a conclusion , if turtles can find the same beach after years to lay eggs and salmon to find the same river, who is to comment. I think each persons body knows who and where they are supposed to be. I think I am where I am supposed to be reading about Elliot, Although I don’t want his journey as it is the hardest one. I know all of us have had to struggle emotionally and at times physically to be who we are, still a work in progress. Good Luck, Elliot help someone else who doesn’t have your resources and visibility!

I've not seen Inception, but now that I see it is available on Amazon Prime, may have to give it a go. I also am a big Juno fan. He was also in Gaycation, a series about travel to various worldwide destinations and what it is like being LGBTQ there. It was interesting.

Like you, this took me by surprise.
I love what Elliot did in Gaycation and I'm all for Inception but Juno was genius.
People on twitter (of course) were piling up when Elliot was called 'brave'. Of course it probably came from TERFS and idiotic straight people. Coming out is still dangerous. Coming out as Trans could imply violence. Even though Elliot recognizes his privilege (his post was fantastic), there ARE still dangers when one comes out as Trans...
On to re-watch The Umbrella Academy.

Very happy for Elliot. Adore Juno. The aesthetic remains... talent is talent. And I like that direct, non-fussy, no shoe gazing approach to acting. NBC News ran a segment about the rise in violence toward the transgender community on the same night they told us about Elliot. So, that was good. Awareness is 25% of anything. Glad Elliot can live an authentic life. I have a nephew who is making the same transition... was a-sexual, then an lesbian, and now... my nephew. Very proud of him. He's a wonderful young man.