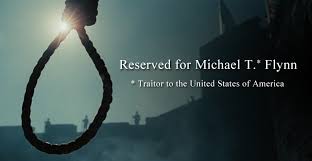 I think the multiple stories in the NYT and other outlets tells you exactly where we are with BLOTUS.
Michael Flynn, who admitted lying to the FBI, fired by BLOTUS himself, was convicted and sentenced by the courts and then given a full pardon by BLOTUS himself, still has access to the Oval Office.  Physical and influential.
........and is suggesting stating there BLOTUS should invoke martial law to turn over the election.
This happened.  This week. After the Electoral College.
Mull on that.
Allegedly Flynn accused others in the room who questioned this line of defense of abandoning the "president".  The same guy who fired him.
I guess when you get a pardon, you gotta stick that tongue up the ass (literally and figuratively) of the guy who gave it to you and wiggle it around but good.......and for a long time. Like the rest of your life.
So, this is where we are. You think it's over and then it's not.
Oh - and there are reports that BLOTUS is "suggesting" large protests should happen in DC on January 6th when Congress counts those electoral votes.
So no. This is not over. This is going to be a shit show. I know you already thought it was.  You were wrong.
.....on a complete other note. When I wrote about Saturn and Jupiter converging happening tomorrow, but you'd be able to see them get closer day after day - we have not had one day of clear sky. And it doesn't look like we will for tomorrow either.  I guess I will have to wait another 800 years to catch that.  Bother!
Song by: Lou Reed
Posted by Blobby at 12:07 AM

Jupiter and Saturn are supposed to converge Monday night right after sunset and they will somewhere. Trump is headed to Mar A Lago Dec 23-January 3rd, a remote coup ! I prefer a BMW coup if I can get one , great brakes and a straight 6. Trump is too much of a chicken shit to run a coup, he doesn’t believe in anything enough to die for it. And he would! Seems like hard times, Trump is not Eva Peron , too much time on our hands a totally incompetent , ignorant figurehead , who has no place to go but prison. January 20, 2021 . imagine Visualize. Make a wish and you’re there!

ALL OF THEM should meet the noose!

I plan on seeing such this evening on our PM dog walk. I hope it is not disappointing.

I dunno. Flynn is a fly dung at this point. But then... that's what I thought of the orange ogre when he came down that escalator announcing he was running in 2016... so? Let's hope you're wrong.