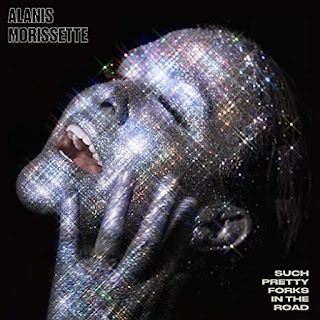 I like Alanis Morissette enough - here and there. Not enough that before 2020 that I have ever purchased a full disk of hers - and honestly, if I never hear "Ironic" or "Hand in My Pocket" again, it will be too soon. But as an artist, she's interesting - mostly as a lyricist and singer. Her style isn't like anyone else's and honestly at times it can push being a bit much.
That said, I kept hearing tracks from Such Pretty Forks in the Road that intrigued me. The album is piano driven. Heavy on it, actually. Oddly, the first song I heard from this disk,  "Ablaze" , might be one of the least piano tracks, and which I might have played a dozen times in a row. The single before that, "The Reasons I Drink" (which could be my autobiography title) starts off very light hearted piano. But the song has a good hook. The accompanying video has a slight nod to her "Ironic" video.  The hook stays with you on that one.
A more frequent song in rotation is the longest song, the ever building "Nemesis". Maybe it's the drums, regular and timpani. Or the strings. Or the combo. It has a Bonnie Tyler - Jim Steinman quality about it if you aren't lyrics driven. I've also come to really latch onto "Losing the Plot" and "Sandbox Love", the latter of which could just be called "AF".
I have come to really like "Reckoning" and "Smiling" - which really has an interesting chorus, not so much for the words , but the notes in said chorus. The intrigue and problem with Morissette is her phrasing and sometimes mush mouth. Understanding the lyrics - not the meaning, but the actual words - can be a challenge.
It doesn't alway help when she crams too many syllables into too short of a measure. Conversely - she can drag out one word, or syllable, over too many measures. That said, no other artist truly does this, let alone and kind of make it work. And many-a-time, there is no rhyme scheme. Or rhyme. A few times it was as if the lyrics were just free form to fit into a piece of music she was given moments before recording. This isn't necessarily bad - just different.
The disk isn't perfect.  The other songs are fine, but not memorable - still, I had zero expectations for this disk at all. None. In a way, due to that, Such Pretty Forks... surpassed them.
Posted by Blobby at 12:07 AM

I adore this album. Not a huge Alanis fan. She does have a couple of listen-worthy albums... this and Flavors of Entanglement are my faves. This spent a whole month in the CD player in my car. There is a sameness to much of it, but a lot of standout moments... The Reasons I Drink. Her vocals are weaker than in the past, but still carry a whallop. Drink and Smiling - the stories of my life :) Love them. It's nice when someone else articulates what we are all feeling.