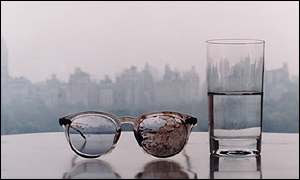 40 years.
John Lennon's death is one of those, 'I'll always remember where I was' moments. Unsurprising to many here, this is a date I didn't even need to look up.
Doing my accounting homework in my teen bedroom with the radio on I heard that John Lennon had been shot. I went down the hall to mention it to my parents, and I got to hear Howard Cosell confirm it.
That is not quite something you expect, or want, to hear from a Monday Night Football announcer.
I think it was the first time that any artist of whom I knew had died, let alone been murdered. I had such a thing for the Beatles it was just an indescribable feeling.
The previous months and years had brought on John Bonham and Keith Moon's death. There were our high school bus rides where others would try to downplay the importance of Lennon over the other two. I steadfastly remained in the 'argument' that without Lennon and the Beatles it is quite probable there would have been no Zeppelin or Who.  I'd argue that point today.
Lennon arguably gave us some of the best Beatles songs. Sure, we know that most are credited to Lennon-McCartney, but we also know that became more of a business arrangement than an artistic one. He was also arguably the funniest - if A Hard Day's Night was accurate, and if not just a snapshot in time.
His solo career was short and spotty. Not a fan of his Spector led disk, Rock n Roll, but man do I love "Mind Games" I'd also argue the point that "Imagine" and "Happy Xmas (the War is Over)" are good songs. Maybe they once were - but honestly, they are woefully overplayed and overstated.
I would venture to say, no matter how many times I'm in NYC, I pass the Dakota - rarely on purpose, but just to get from point A to B. It's hard not to look at the actual area where Lennon was actually shot. Actually, I've never not stopped, looked, and contemplated that night.
It seems unfathomable though that at the 40 year mark, Lennon is only two months shy of being dead longer than alive. I am curious about what could have come after Double Fantasy.
Song by: John Lennon
Posted by Blobby at 12:07 AM

I agree that 'Imagine' is an all-time great song, though cheapened over the years by having been vastly overplayed and which still goes on. Blimey, it's never stopped! And one just has to gloss over the line "Imagine no possessions" every flaming time. If it had been penned by someone even just comfortably off rather than from a millionaire it might have found greater public resonance. Still, definitely a superior song, one of his very best.

His was one of those several celebrity deaths where, because of my location, I know where I was because I only first heard of it on the early morning news - Elvis and Michael J. were others, as was Princess Di, even though hers was, or course, in Paris.

One can't help but wonder what would Lennon's post 1980-output have been like. Would he and Yoko still be married? I doubt it, but it's an impossible question. More pertinently, would he be rubbishing much of his previous creations, including 'Double Fantasy', as he did so forcibly in his post-Beatles years ("Garbage!") Yes, I can see that.

Doubtless his was one of those rare, unforeseen deaths that impacted on many more millions of people all over than many other figures cut down in their prime. He really wasn't wildly wrong when he said that the Beatles were "more popular than Jesus", though perhaps only in terms of intensity of frenzied adulation at the time rather than in numbers. It saddens me deeply when I see that to many of current and, indeed, previous generations now, his name means little or nothing, though I suppose that's a characteristic of all ages. In my books his memory and appreciation deserves much, MUCH better.

I seem to remember Historical figures more than musicians. Elvis is a vague memory . John F.Kennedy and Princess Diana shocked my internal GPS enough to know where I was . Kennedy is burnt in my brain. Good bad what might have been. I wish my adult life had had no AIDS VIRUS and I would have given up most popular music for that . I’m negative but not untouched. Sometimes musicians privilege or poverty affects me more than their work. As I’ve said before I envy your knowledge and love of music!

Never liked the Beatles. The Stones. YEAH. I did like John Lennon - his Beatles stuff anchored the group and made them less of a fluff factory. And his solo stuff was absolutely revolutionary, at times. He could be lazy, too. I was saddened to learn about his violent past and domestic abuse record, but I think, had he lived, he would have owned it and done his best to make up for it. I, too, wonder what would have happened had he lived. I think he would have been a Travelling Wilbury and Jeff Lynne would have gotten his mitts on him in the 1990's. Then Rick Rubin. Then Jack White. I'm sure there is some awesome fan fiction written on the topic. Yoko's Season of Glass shook me cold.

I was watching MNF with the idiot guy I was dating at the time (and I despise football). he started laughing when howard cosell broke the news. I threw nick out of my apartment and never saw him again. a few months later, nick was arrested for cooking the books for his employer. bwhahahahaha!

and the murderer STILL thinks he did nothing wrong. MUTHAFUCKA. may he rot and die!

I wonder what could have been.

I was coming home from a Christmas party when I heard the news on the radio. It took me awhile to get to bed that night.

I thought it was Jack Lemmon and wondered why WMMS gave a shit.

I was stationed in Seoul Korea and I woke up to the clock radio telling me the news. Such a shocking thing. I really could not wrap my head around it.