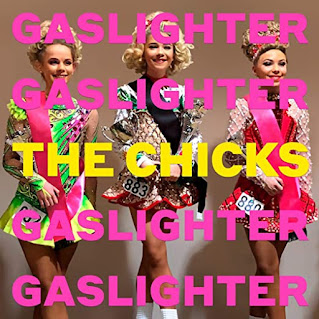 The Chicks' new disk, Gaslighter, is good. Very good, actually. But it's not great. In theory, you could say that about all their albums. But perfect gets in the way of good.
Country music abandoned the Chicks in 2003 and in 2006, they started to abandon country. 14 years later, they take another leap with the help of Taylor Swift and Lana Del Ray's producer, Jack Antonoff.  The problem for the band is it's a tad bit difficult to leave the genre when one member plays violin and another plays dobro and slide guitars as well as banjo.
While I don't truly know Swift's music, I have to believe there was carry-over from her country days to whatever she's doing now.
From Gaslighter's title track / first single, you more than got the idea that this would be as personal, if not more so, than their Taking the Long Way. But this wouldn't be career personal, but relationship personal. The group doesn't disappoint on that level.  Since their last disk, all three experienced divorce - some (Natalie Maines') worse than others. And it's all represented lyrically.
“My husband’s girlfriend’s husband just called me / How messed up is that?" is an early-on lyric from one of the most accessible songs, "Sleep at Night".  And then right to the point with:  "I hope you die peacefully in your sleep Just kidding, I hope it hurts like you hurt me" from  Tights On My Boat".  The former song is a little more traditional for the Chicks, though they branch out. The latter is new and in a way it really really works, though I'm guessing if I actually listened to Swift, it's a style Antonoff has used on her. There is one small vocal run that really annoys me, but the rest is spot on and very well done.
They do really well with "Texas Man", "Hope It's Something Good" and the closer, "Set Me Free". And there was some moments that sound like updates from something they would have done on Home. While I totally dig the chorus on "Everybody Loves You", the verses are just 'meh'.  And while some of the instrumentation on "For Her" and "Young Man" are good, neither song draws me in.
The band does well incorporating Martie Maguire's fiddle / violin / viola and Emily Strayer's guitars and banjo into the mix. Maines' voice is as strong, compelling and expressive as ever - all of them coming together, possibly better than ever, in "March March".
This song is as far away from country as these women have ever been (well except for when they played Motorhead between sets at their concert). EDM-lite-like. I know the year is just half over, but so far this is hand's down my favourite song of the year.
Antonoff does good work with production and melodies. While there are some drums on this record, it's more about percussion and some unique uses of it. The mix itself is ok. Maines, as a lead vocalist, stands out, but Strayer and Maguire seem more in the background than ever - and while there are really really nice moments, there are not enough harmonies.
Still, Gaslighter has been in somewhat heavy rotation for the last two weeks or so.  I enjoy it. I like it a lot.  And that ain't nothing.
Posted by Blobby at 12:07 AM

Can’t ever go wrong with The Chicks!