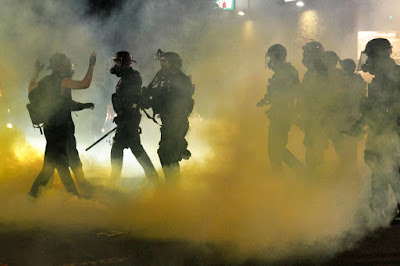 Last I checked, the 1st Amendment still stands, no?
Sure, this administration treats the Constitution like a piece of one-ply Charmin, and yes, usually it's only the 2nd one that the federal government truly values, but.....
Portland.
What. The. Actual. Fuck.
I'm not sure there is anything I can currently say about the fucked-uppedness that is Portland, Oregon at this moment that will come out concise, let alone clear.
The right to Free Speech and Assembly are still on the books, right?  So the idea that BLOTUS has unidentified men (*) pulling protestors, and btw, non-protesters off the street and putting them in unmarked cars and taking them away is fucking frightening.
Right now it's unknown if anyone is charged with a thing, how many are in custody or where exactly they were taken. Think about that for a bit.
Sound familiar?   It should.
Think: Poland 1939.
Often, I have compared this administration to Hitler and Nazi Germany. That comparison continues and it's all too real.
Maybe Portland is test to see how much the White House and DOJ can get away with, who the fuck knows. My anxiety certainly comes from the fact that this administration has gotten away with everything. Even the folks tried in court and sentenced to prison.  Flynn and Stone, totally off the hook.
Someone should tell Barr if it's safe for kids to go back to school, Paul Manafort can go back to prison.
And I do mean that BLOTUS has gotten away with the slightest ethics violation to outright corruption, and along the way is killing all of us with his ineptness when it comes to disease management.
Portland protests have not been out of the ordinary to send in militarized police tactics. Every other state has used their own police force as necessary - and even those have been excessive. This is new. Well, for this country. Many other dictatorships have already been down this road.
Again, if you're not scared yet, you should be.
*Department of Homeland Security has already acknowledged being there and sent by the Federal Government.
Song by: the Replacements
Posted by Blobby at 12:07 AM

I strongly feel your justified terror. Cheeses Cripes! When this happens in a country like yours the entire world seriously needs be on guard.

Evil is transparent. The few times in my life I have encountered it, the monster didn’t even try to hide. I have been able in my life to destroy it , on a small scale or avoid it. I have always done the prudent thing. I will do it again if it comes to call , to whatever extent I must sacrifice myself. BLOTUS you and your ilk are a wretched bunch and I am ready. I will pick the time, you will never see me or my companions, as we take you down and take back what you have tarnished or stolen. You don’t own it , get ready to lose it , You filthy motherfucker!

the city and state are suing the feds over this. BY WHAT RIGHT does the orange fuck have to do this?

It is a well-known fact that Illuminati consist of Multi Millionaires,
Billionaires who have major influence regarding most global affairs,
including the planning of a New World Order. Many world leaders,
Presidents, Prime Ministers, royalty and senior executives of major Fortune
500 companies are members of Illuminati. join a secret cabal of mysterious
forces and become rich with boundless measures of wealth in your company or
any given business, the great Illuminati can make everything possible just
contact : brightiluminati666@gmail.com
.com or WhatsApp +593960127139.
Thaddeus I am Vice-President of Citizen Outreach THE ILLUMINATI
ORGANIZATIONDo not hesitate to contact us by WhatsApp.: +593960127139
Email : brightiluminati666@gmail.comBEWARE OF SCAMMERS, THERE IS NO SUCH THING AS REGISTRATION FEE AND YOU MUST
BE ABOVE THE AGE OF 18YRS.
THANKS