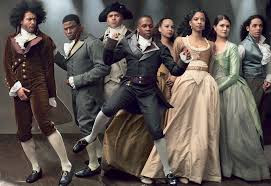 If you've read me for any time, you might have recalled my trepidation about anything Hamilton related.
I like Lin Manuel Miranda enough as a person - not that I know him. But I encourage you to watch the YouTube videos of him and Jonathan Groff share a dressing room during the run of the play.
Something in my pea brain (yes, I know it was walnut sized two days ago, but...atrophy) I've usually steered clear of the most popular things. I didn't see Star Wars until Empire Strikes Back was to be released.  I've never seen E.T. or Grease. I don't own Frampton Comes Alive or Jagged Little Pill and the likes. If everyone else had to have it, I usually didn't. Ditto with Hamilton. I applauded Laurie Anderson's comments about it in a post from four years ago.
BTW - I had nothing to back up my feelings. I had never heard a song or anything. My back goes up at musicals. Maybe doubly so at a phrase like  'hip hop musical'.  Still I steered away.
We had an opportunity to see the touring production when we were in San Francisco last November. We thought we'd wait a day, and that was the day it was dark. Oops. And then we left town.
But I was taken by the Hamilton cast zoom on John Krasinski's Some Good News and you know, with our YouTube TV or something we get a year free of Disney +.   Time is running on that, as we didn't care (or don't think we care) to see the Manadlorian. Yes, another thing EVERYONE says we should watch, so my natural reaction is 'no'. Ditto with Tiger King.  And "friends" on FB were literally counting down the hours before they could view the stage-to-screen movie version of the play.
Anyhooo.......we took in Hamilton, as I have every intention of making it 18 "movies" this year, coronavirus be damned.
I'll give it this. It was a filmed version of the play. Not an adaptation, or an extravagant set movie with the music, which I kind of envisioned it would be once opted for theaters. This more minimalist version seemed a better idea to me.
What I won't give it is great sound. I thought parts, especially at the beginning were muted and muddied. I mean, I also have old-man ears, so those can not be discounted, but when certain performers were on later, there was no issue.
The opening number was still by far the best. Groff did much better than expected with his three numbers (one with a huge spit scene - intended or not). And Renée Elise Goldsberry and Leslie Odom Jr were far and away the better performers of the play - especially Odom. Daveed Diggs is ok, at best, as Lafayette but shines as Jefferson. The guy who played George Washington was good too. It seemed like there were LOTS of extraneous dancers, taking away from just about everything else on stage (though they work well, albeit briefly, in "Hurricane").
Yes, you can say there was hip hop and rap-lite numbers, but make no mistake, there were the trite Broadway ones too. They were the ones like about anything else that goes through that modern day B'way song mill of totally sung the same way forgettable songs.
Overall, Hamilton was ok. I don't get why everyone is tripping over themselves to praise it, except to sound hipper than they actually are and the whole fear of missing out mentality.
Anderson wasn't wrong when she said, "it's not that different".  And it isn't.
2020 Movie Count / Goal: 08 of 18
Song by: the cast of Hamilton
Posted by Blobby at 12:07 AM

I watched a full version of 'Hamilton' on YouTube sometime last year, which I think was a Broadway production though I can't find it now. Initially sceptical about all the adulation it was getting I was soon won over and enjoyed it hugely - and I look forward immensely to seeing this new film, somehow, though unclear quite how, having never 'streamed' a film and don't want to pay for it unless being shown in a cinema. Sorry to note it failed to impress you, but definitely one for my 'must-see list'.

I have yet to see the show or even know the music; I fear when I do the show won't live up to the hype.

Agreed Spo. Good point that I did not cover. How COULD it live up to the hype?