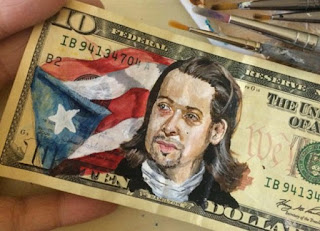 Allegedly, the rise of Hamilton might have kept old Alex on the 10-spot.

The plan was to replace him with some female, but that eventually became the $20 bill and Andrew Jackson got the axe.

I'm one who steers away from anything that is hyped as much as Hamilton is. I did it with the original Star Wars - not bothering to see it until just before Empire Strike Back was released.

Granted, I was wrong on that one. But a more modern day example would be Beyonce.

Lemonade?  Really?  It ain't all that.

Lin-Manuel Miranda seems engaging enough, but not enough to spend four or five digits to see his fucking play based on an autobiography of Hamilton. I can pick that up at the liberry - and it won't rap at me. So - two points for Blobby.

Fine - it won 13,081 Tonys the other night. It's like one of those things no one dares vote against...because you're not hip or cool if you don't. People are tripping over themselves to praise it or go to it.

I'm just not one of them.  ....though tickets are probably better than a child.

Je love her. Most everything about her. The article discusses her performance pieces, but gets into politics and yes, Hamilton. And this is why I love her.   (click to embiggen the images) 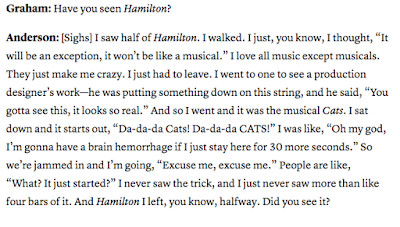 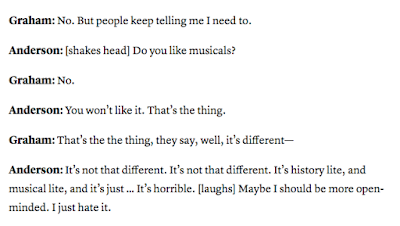 I'm sure it's my own fandom of Anderson and my own trepidation (real or not) about Hamilton, but I feel that someone somewhere finally told the truth about the play.

I saw CATS; it sucked.

the last play I saw on broadway in NYC was "the producers"; nathan lane and matthew broderick were smashing, but I liked the movie better.

I like musicals. (As a category, I mean. I don't like all of them.) On the other hand, I don't care for movies. And the more hype there is about a movie, the less interested I am in seeing it. Friends often recommend movies and I thank them and just don't go.

I am curious to see what all the hype is about. Like Cats and A Chorus Line, I will wait the years needed to have the hype die down before going . It will be probably be OK but not as glorious as everyone made it out to be.