the Rape of the World 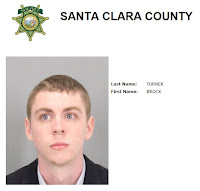 It's a privileged world for the white male athlete. Isn't it?

They say, don't do the crime if you can't do the time. But half a year for 20 minutes in heaven? Seems like a reasonable compromise. Three squares and a place to live rent free?  What a deal.

Even Lindsey Lohan can do six months!

Yes, any rape is horrifying. But to get raped a second time by the judge has to be soul crushing - for the victim and for justice in general.

If it were the first time, that's kind of (?) one thing. But another judge did this a year or so ago, giving 20 days to the rapist. And the Affluenza teen getting off totally {pretty much} for killing four people.

It certainly doesn't pay to have a jury trial. By all means - I'd be taking my chances with a judge.

Seriously, what was the judge thinking? I honestly cannot fathom a scenario - ANY scenario - where rape warrants just six months in jail. No doubt he'll get it knocked down to four for good behaviour.

Of course, I am hoping he experiences prison rape himself. Just on the receiving end.

If nothing else, those other incarcerated rapists are going to be even more pissed that he got his sentence - and they got theirs:  10-15 years. That cannot bode well for him.

And OMG - the father. WHAT the fuck was he thinking writing that letter. Dude, I'm glad you love your song, but how fucking delusional are you? His son got "20 minutes of action".  REALLY???

But it's not like those Steubenville boys did any hard time either.

I'd ask what it takes to be jailed as a rapist in this country, but the answer is pretty easy: black. or Hispanic (ask Donald Trump).

the rapist needs his balls cut off, the judge should be removed from office, and the father should spend time getting raped in prison.

NO EXCUSES. NO WHITE PRIVILEGE. PERIOD.

The girl's letter that she read to the court sums up my disgust perfectly, especially when she asks that if her rapist was just a community college athlete would his sentence have been longer.