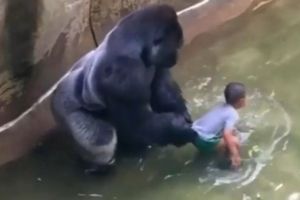 I know it's everywhere, but that Cincinnati gorilla. (Meredity - where did they get that gorilla???)

Oh, the discussion on this at the high school cafeteria table on Memorial Day. No one - well, save me - defended the gorilla. Granted, I did not see the video, as I refused to watch, but by all accounts, it was doing what a gorilla might.

The argument was that the mother - again, by their accounts - lost track of her kid for all of 5 seconds, but that was all it took. Allegedly. They teller of this tale actually had the nerve to say, "but she was taking care of four kids......" as if that's an excuse as to why you were successfully watching only three of them.

And if you have them but can't watch them, maybe don't take them where there are dangerous animals.

By all means, take them to NASCAR, South Central or a Broadway production of Spiderman already if you're looking to put him in harm's way.

Still - and allegedly - the entire event took place within 10 minutes, but somehow in that 10 minutes "they" found a sharpshooter to come in and kill the primate.

Where does one call a sharpshooter on a holiday weekend, let alone at short notice?

I mean, do you know what it costs to find a plumber on a holiday weekend?  What would a gorilla killer set you back?  And if you have a sharpshooter on hand, don't you have tranquilizers too?

Honestly, I'm ok with vilifying the mother. Let it haunt her the rest of her fucking life.

The sad thing is: this kid already has his college application essay written for him. It practically writes itself. And like Elle Woods, he can now include video.

Ok, I kid.  That kid is never getting into college.

This has been big news here too, though whenever it's mentioned I have to switch channels, finding it too distressing to dwell on.

the kid should have been shot instead; too many damn human crotchdroppings and not enough handsome gorillas.

the "parent" is mos def at fault and should be sued.

If the mother wanted her kid back she should have climbed down there herself to confront the gorilla.
I mean how embarrassing on the playground. I can hear all the kids taunting "Your momma only stood there. She had to call in a sharp shooter. Your momma's a chicken"
Who is going to pay for the years of therapy?

Love your take on this! You definitely made up for having a couple of "nothing to say" posts with this. Good stuff here.

And That Mother works at a Day Care. Imagine the parents of the kids she watchers realizing she can't even keep track of her own.
One more reason I prefer animals to people.