Punching in a Dream 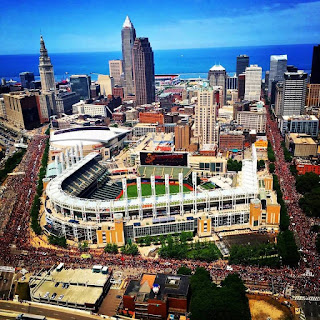 Machete-wielding clowns chasing me down a dark deserted road.

Flipping over the handlebars of my bike and breaking my front teeth.

The world runs out of cupcakes.

Any or all of these things you would think would be my biggest nightmare.

Try a celebratory parade by the NBA Champions that starts an hour late, has 1.3 million people in attendance and little to no port-a-potties.

From the sound of it, every hotel room was packed. Even locals booked them so they wouldn't have to travel the day of the event. That is hardcore.

While in theory it would have been fun to skip work and go downtown to see the throngs of folks...and Kevin Love (!!!!!)......packed train (because where are you really going to park?), high humidity, the people I saw walking to the train before 07:00......two-fisted drinking, long wait times, oh - and over a million people just didn't get me thinking, "I really need to be there!".

My decision - not that I was actually trying to decide - came with a headline article saying anyone attending would have to "go before you go".

While the article implied there would be zero port-a-pots, in reality there were - - just not nearly enough for the amount of attendees.

I could have probably overcome all the other things had I really wanted to go - save that one. When I gotta go, I gotta go - and I'm not fighting to stand in a small enclosed area that got heated up by the sun to 124 degrees.  And you just know the area hotels and restaurants aren't that keen on letting in people just to they can go #1 or 2.

And that's really the biggest part of the nightmare - - where you're almost there....and you need to be, but then are denied.

And now you have a ticking clock.

Song by: the Naked and Famous
Posted by Blobby at 12:04 AM

now just wait til the rethugs arrive; it will be even worse than this!

I imagine people peeing everywhere.
NIGHTMARE!
Not to mention the smell!

Sorry I haven't got over the line "The World Runs Out of Cupcakes."
JP