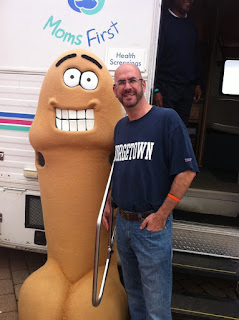 I know I don't blog a lot about work - and that is the way it will remain, for the most part. But I had a funny to share.

I had my monthly one-on-one with my boss two days ago. Normally, there isn't a lot to talk about but I had a few things on which I needed guidance.

One of my docs, whom I like personally, but can be problematic professionally. The Boss must have already heard a rumbling or two of what I was about to say, but I gave further details.

I should state that the boss knows I'm gay. No big deal - for either of us. The Boss asks about 710 now and again, though they've never crossed paths. It's a nice gesture. And as much as I don't talk about work here, I rarely talk about personally life there.

Anyhoo.....as I provided specifics on this doc's antics, the Boss goes, "he sounds like a real dick".

I said, "he only sounds that way because he is a dick......or can be one". But I went on to say, that he doesn't bother me and I can handle his behaviour, but there was a bigger underlying contract issue that needed resolved.

And this is how the Boss followed up - and in all seriousness:  "well, I know you know how handle dicks".

Honestly, I think the Boss would have laughed had I pointed out the statement and made a funny. But then I thought, well.......maybe they'd feel bad about me pointing out what was clearly an unintended pun - and one that, in lesser hands, be an HR nightmare.

I wasn't offended in the slightest, and I laughed internally, but don't think I made any outward changes to my demeanor as I sat in their office.

In my mind, the Boss is simultaneously telling this story at home, and while it being a humourous story, theirs has a slight mortified edge to the tale, like "can you believe I said that?"


....and it's not like the Boss was telling tall tales or untruths!  {wink}

Song by: Macklemore
Posted by Blobby at 12:06 AM

Moms first? So, after that it's the dads' turn?

Great picture. You didn't complain about the hostile work environment?

I can imagine The Boss did share the story at home with that different take on it.
Too funny.

Would've worked just as well if you had called him an asshole.

If you didn't share it, I am glad you did!