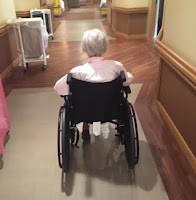 I'll take a break from gun violence posts today. They drain me.

Portman is the dick who faux-wrote me after Sandy Hook, saying he's firmly behind keeping assault rifles legal. I made a "joke" then saying, if his gay son got shot, he'd be all for gun control.

If you remember, Portman was against same sex anything until he discovered his son was a fruit-loop. So now that gays DO get shot up with assault rifles, Robby-boy has seen the error of his ways.

I'll take the vote - if he actually gives it - but I still hate him.

Well, so much for me not talking about guns.


In other news - my mother is home. She was a compliant patient in the hospital and in her week of rehab. She learned the error of her husband's ways when he was a pain in the ass patient. I was proud of how well she did being three weeks in outside care.

Now, since she's been home, she's a little less compliant. This was to be expected.

She went home with no oxygen and has a walker if she needs one, but passed all assessments to walk unassisted. All good news.

Well, 4. Because before she even left rehab she decreased the time we had scheduled - and without telling us. Oh and the first day she said she didn't want anyone there - - possibly the most important day to have someone there.

I totally get it - it is not easy having someone you don't know in your house for four hours at a time. The idea is they'd be there when she showered, just in case. But that's what - 30 minutes?

Now the aide can fix meals, do laundry and light cleaning. My mother is all: "I'll have to refold everything - she didn't do it right".  Sigh.  But I get it.

She's smart enough not to try to carry laundry - no matter how light - upstairs. She hasn't even thought of driving. And the lady across the street said if she sees her cutting her lawn that she's calling me.

Way to go lady across the street.

So I keep tabs on her daily - through phone or email. She does love her iPad.

She seems to be pretty stable, but she should be ok for a while. Personally, I'm hoping she'll miss the conversations she was having with others in rehab. She collected some stories, but now she's at home alone. I kind of want her want interaction......which might mean senior living, but I think that would be good for her.

That might take a little doing, but a boy can dream.

Song by: Everything But the Girl
Posted by Blobby at 12:03 AM

thank you for the update on your mom. do you have any "senior day care" facilities there? your mom might enjoy some companionship that way.

I imagine it would be hard to have someone, a stranger no less, "doing for you" when you've been doing it yourself for so long.
Hopefully your Mom will settle into it and take the help as she needs it.

Good luck (and admit it, how much different would you be? Has the apple fallen very far from the tree?)