We Are the Champions 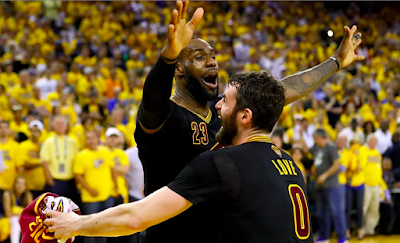 I've lived in Cleveland most of my entire life. I can honestly say, never in my recollection have we been Champions.

Well "we" aren't, but the Cleveland Cavaliers are.

I say 'recollection' because the last time we had something like this was 1964 - I was one and a half years old. And it was football. But it was before the Super Bowl existed, so it was called a 'league championship'.

Sure, the Lake Erie Monsters won their championship two weeks ago it doesn't really count. It's minor league. And it's hockey.

But Sunday night, we butched it up (well, kind of) and watched Game 7 of the NBA finals.

Against all odds, Cleveland tied up the series after they were behind 3-1 (for you non-sports guys.....{Jon}.......like baseball, it's best of seven games to win the championship). Never before in NBA history has a team come back from a deficit like that to win - so nothing was statistically on our side.

I thought it again when we tied up the series.

But we watched Game 7.....kind of.  When it comes down to it, those types of games and odds are way too stressful for me. Within a span of a few minutes we were up by seven, then down my eight, up by two and then tied. I had to keep flipping channels.

Honestly, it really wasn't until the last 10.6 seconds that I knew we would win. After LeBron James made one of his foul shots (he almost always misses half of them) we were up by four points. No way could the Warriors make two baskets to win or tie the game in 10.6 seconds.

710 didn't do the math. When the Warriors went for their shot, he screamed "noooooo".  But even if it were a three pointer - which it wasn't - that still would have left them one point short of a tie.

The Cleveland Indians have come close twice before - taking both the 1995 and 1997 World Series to the seventh game......but not with a win.

It was oddly nice and satisfying to feel that the town had come together for this. Everyone at work was in a great mood - considering I'm sure those who had a shorter sleep cycle. (For the record, right after an interview or two, I headed to bed.)

Fireworks - official ones - started immediately after the win. Lots of unofficial ones too. And then, well, it was just gunfire. Lots and lots and lots of gunfire. And honking. Every car laid on their horn. And of course, there were a few crashes......but they just kept going.

I'm no James fan. I still think he did a shitty thing when he left for Miami. But it's hard to argue with three 40+ point games in a row. He carried the team. And while he didn't play great for half of the finals, but I'll never turn on Kevin Love.  NEVER!

Cleveland has a basketball team?
I wonder if San Diego does? I'll have to ask one day.
Oh I almost forgot, congrats.