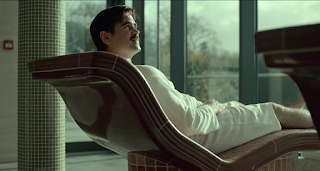 That is the short review for the Lobster.

The slightly longer review would be: Fucked Up.......but in certain regards, it's a world we are already on the edge of living in and maybe always have been. To a degree.

The Lobster takes place in a time where people are not allowed to be single. You must carry your "couples papers" with you at all times, or be subject to interrogation. Those who are single are sent to resort where you have 45 days to find a partner, or be turned into an animal of your choice.

You can add more time to your stay, depending on how many people you can shoot with a tranquilizer gun while hunting them in the woods.

The Lobster is a sort of the Most Dangerous Game meets the Bachelor / Bachelorette - with a little Ministry of Magic checking your wand to prove your a wizard or a witch, and I guess a little the Incredible Mr. Limpet.

The trailer made it look better than it was, or at least more light-hearted than it was. I get it was to be a dark comedy-ish movie....but it was slightly darker than imagined. And by 'slightly', I mean much more.

It is a dystopian society they now live in. Both of them. On one hand you have the faction that tell you that you must be partnered or be an animal. There is another faction of those who live on the fringe - and in the woods - who eschew this way of thinking. The irony is, their beliefs swing the other way on the pendulum: not only do they believe you don't have to be partnered up, you're actually punished - physically - for even flirting or dancing (though they can dance by themselves, which is why they listen to EDM via headphones). Intercourse is a new level of punishment.

I picked 'dystopia' on purpose. The word, derived from the Greeks, the Lobster is all about the Greek - in terms of the director who is, and the story, which has heavy elements of a Greek tragedies. None of this is coincidence.

Colin Farrell and Rachel Weisz do a nice job. The delivery is stilted, especially on Farrell's part, but it's supposed to be. He's out of place, he's unsure - yet somehow resigned to his potential fate of becoming a lobster.

The rest of the cast is effective - some eerily so. And yes, Ben Wishaw is in it (like third thing I've seen him in this year).

The 'resort' makes it a semi-spoken factor that couples should have common interests - and that works for and then against most of them. Almost all to uncomfortable ends.

710 mentioned before deciding to go, that he had seen a partial review and it mentioned how odd and dark the ending was. For a bit, I opted out of even going due to hearing a review. But I changed my mind - but I won't lie, I looked away more than a few times. Once even covering my ears. One couple in the theater (only 11 of us in the entire place - - - yes, I counted) laughed at a part I almost got up and walked out during. I could not fathom a laugh...even out of nerves.

The movie takes some odd turns, but some of the filming is extremely well done.

I know we still have 6.5 months to go, but I'm going on record that the Lobster might be the weirdest movie I'll be seeing in all of 2016.


....oh, and for the record, according to the Lobster website, the animal I'll become if I am out of a coupling and never recoupled? 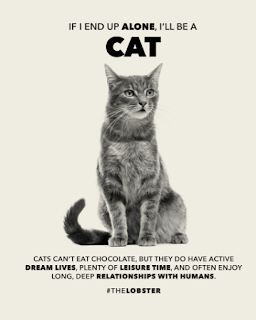 I'm largely with you on 'Lobster', except that I did like the casting of Farrell in a role outside his usual range, and found any discomfort he may have exhibited arose from the social awkwardness of the character he was playing.
My opinion of the film as a whole increased with time, such that it did end up in my Top 10 films of 2015, though I wasn't so sure that it would have while watching it. Certainly the memory of it lingers more than most, in a disturbing way.
As for Mr Whishaw's appearance(s), I've seen him in at least half a dozen films in the last twelve months and, though I'm not complaining (I do quite like him, after all) I was beginning to wonder whether he ought not to be giving other young, up-and-coming actors a look in.

I'm a Dove.
....oh and Daniel Radcliffe mumbled "I want to Have sex" while I was throwing him around. I'm all for it.

I'm an Owl. As with almost all movies, I'll wait until it comes out on Netflix or iTunes, but I do want to see it.

I saw it today. It left me wondering why I bothered. I liked several of the leads, so I thought it would be quirky funny, but I was mistaken. Everything John C Riley does is hilarious, but this was not. I read Colin Farrell's discomfort the same way you did - it was totally right for his role. The ending was very abrupt, and left me scratching my head. There are other new movies out this week, and I should have picked something else.

One of the strangest, sickest movies I've ever seen. It easily could have been a horribly bad movie but the performances and story kept me wanting to know and see what was next. About 15 mins in I started thinking about what kind of mind the person who wrote this has, that this movie is sicker than movies like Hostel or The Human Centipede. And I know this is shallow and it was for the character but if you're gonna give me a shirtless, tighty whitey clad Colin Farrell, please have him be in his normal in-shape body.