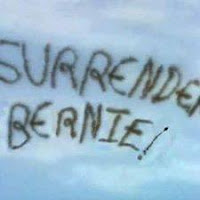 Can I tell you how fucking annoying all these people are who - for lack of a better word - insist anyone who supported Bernie Sanders must now unify and get behind and vote for Hillary?

Don't fucking tell me what to do.

If someone wants to make well-reasoned discussion points on why to vote for Clinton, that's fine. But A. don't tell me who to vote for and B. you had better have a better reason than 'must defeat Trump'.

While I checked the box for Kerry, I didn't vote for him, I voted against Bush. Kerry was a horrible choice too. He just was.

Some gays are happy to point out that Bernie wasn't for same-sex marriage back in 2006. Ok. They happen to leave out that Hillary didn't change her view until 2013. And this isn't a proposition to those folks, but: suck my dick.

This is where they don't have well-reasoned discussion points. The problem is, they think they do.

Now, I get why Clinton supporters need Sanders supporters to get on board - because they are scared, and well they should be. They didn't take Sanders seriously from the get-go and expected him to be gone 2-3 months in. And here it is, 10 months later and even in the last set of primaries he one two of six.

His (non-super) delegate count isn't that far off from Clinton's.

The thing is - from the get-go, Clinton and these folks figure she had a clear and easy path to the nomination and that didn't turn out to be true. She's had to put a lot more time and resources into this campaign just to get the nomination. It has also exposed to not being as big a of liberal as many assumed....or hoped.

Yes, I wanted Sanders to push Hillary more to the left, but that didn't happen. She is just right-of-center as she's always been. That has to hurt her supporters - though they don't see that. Because when you look at the GOP clown car, of course she looks liberal, but so does Ronald Reagan.

I cannot think of a single thing that Clinton has said that has made me go: "wow - what a great point." Not one.

Of course the irony of the Clinton supporter is - they'd loathe if anyone told them they should support Sanders (or anyone else), yet they have no qualms about doing it themselves.

I have the same feelings; I don't REALLY REALLY like HRC but she IS a vote against the rump. the rump would ruin this country.

I've always been a Hillary guy starting back when Bill took office and she took on healthcare. Unfortunately she was placed back in her role as First Lady.
I'm glad Bernie is still campaigning. He's keeping important issues on the table and I believe democrats, like myself, are better for it.
You are correct that it's not my place to tell anyone else who to vote for. I do tell people who I support.

As long as you vote AGAINST Trump, I don't care what your rationale is. The Notorious RBG can't live forever (and honestly, she deserves to enjoy retirement if she wishes to do so) and there is already an open slot on SCOTUS. Vote for the Democrat, ANY Democrat, and sing a Supremes song in your head.