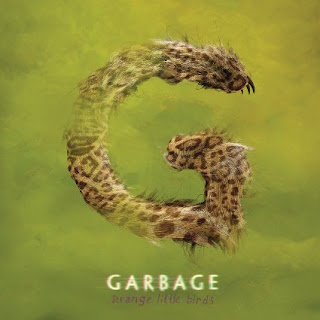 Usually I'm up on things when I know bands I like are coming out with a new album. Somehow I almost missed the boat with the just released disk by Garbage - Strange Little Birds.

Ruckiry (not Jon's boss), I saw it listed a few days before its release and pre-ordered....without even sampling a track.

Strange Little Birds is a good album. It's not an outstanding one. It's better than most albums that are out there, but by Garbage standards, it's just good. Not that there's anything wrong with that.

The thing with the band is, that normally they do the rock songs great, and ditto with the slow moving stuff as well. With this disk, the most of the music is just fine - but nothing defining. Nothing spectacular.

I was enthralled with the opening number - "Sometimes". It was just different enough for them that it kept me engaged.

There are good rock tunes: "Empty" (though there is a vocal phrasing / cadence that sounds like a heavier version of Squeeze's "Up the Junction"). I love "Blackout"'s music. And sure Shirley Manson has the vocal chops, but it seems like a missed opportunity here.

Unlike the previous albums, the slower songs are just ok here. Usually they could be outstanding, but not so much this go-round. "Even Though Our Love is Doomed" is a good example. Five and a half minutes might be too long for a song like this, but if you stick with it, the song moments of what great potential it had.

I do like "Magnetized", "So We Can Stay Alive" and "Teaching Little Fingers to Play". "Night Drive Loneliness" has it's moments, but doesn't quite hit all the marks.

And that really sums up the disk itself - moments but not big pay off. Manson clearly has great ability (and the rest of the band is just great), but she is not used effectively in this outing.