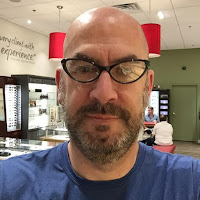 As you can see, I ended up going with something from the Far Side Collection™.

I returned all the Warby Parker models first. There was nothing there I wanted. That was a shame. Some of the frames on the website looked so promising. Yet in the box less so. On my face, even less than that. Granted they had a lot more frames, but not all of theirs are available to try on at home.

Yeah, like that's gonna happen!  I won't even buy shoes on-line because I can't try them on first.

So my choices came down to finding something at the store from which I always select my frames, ones from the David Kind and, somewhere on the back burner that pair for $1,409 was stuck in my mind. It was a dream of course, but.....there it was.

Something Fearsome wrote in my 12 of 12 comments resonated with me to a degree: glasses are a part of one's identity, so I shouldn't skimp on them.

Still, I was on the phone or on-line a lot with the David Kind folks. I think there are three people operating out of someone's house. Everyone very nice, but you can hear everything everyone says while on the phone. The house the operate out of must be one from Tiny House Hunters.

I also called the other place about the expensive pair. I was told I could buy the frames (which were fairly reasonable) and have lenses (which were not) made elsewhere. Interesting. I called a few places and all could do it. A comparable lens was about $400 cheaper. Still pricey, but doable. Half the price of the original place.

The rub was, that if by chance a place couldn't do them, I could get a store credit for the frames, but they don't take returns. That's a big gamble for me.

A few days later, on a whim, I called back and talked to someone new. Sure there were other types of lenses that could supported by the frame. Just as clear as the 'digital' lens - for the most part. Oh - and WAY cheaper.

So I went for it. I really liked the frame, so why not? 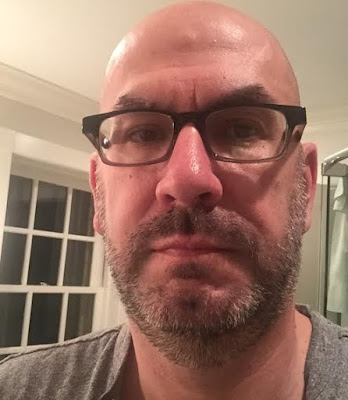 They look fairly standard / conservative from a head-on view. 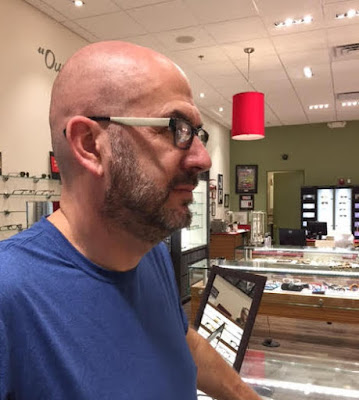 From the side, the frames look a little darker, but the metal arms give it an edgier look.


And the vision so far has been great.

I think I'll be happy with them. And as it turns out, they're not my most expensive pair of glasses ever. That title still belongs to my Tag Heuers.  I still love those glasses, but they are eight years old and two prescriptions ago.

If your older, more expensive frames are in good shape, would it be worthwhile to have new lenses made for them, and use them as back-up pair?

What Carol said; I did that with an old pair of specs that i loved, so now I have a spec and a spare.

Oh and PS:
I do like the new ones. Love the different color arms.

The 1st pair seemed a bit... feminine, especially for your rugged, bearded face. I like the ones you ended up with MUCH better. Good choice!!

I still say you should check out www.ZenniOptical.com for another, "fun" pair.