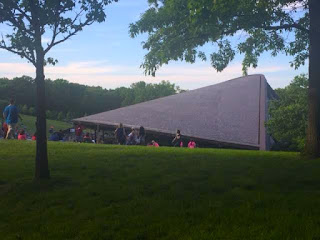 We do not go to many concerts. I think the last big one was Arcade Fire.

But on Friday night we went to go see the Dixie Chicks. They haven't done a real tour of the U.S. in over a decade and Cleveland was their second stop on this leg of the tour (they started in Europe two months ago).

So when they announced last Autumn they'd be touring this summer, I wanted to go. Tickets were outrageous, so we kind of held off.  Within the last few weeks, good seats opened up (I'm too old to sit on the lawn) at a fairly "reasonable" price.....and they were aisle seats, so no crawling over anyone. Score!

It had been a good 12 or so years since we actually hiked out to Blossom Music Center - and that was for Diana Krall and Tony Bennett.

These two are not how I normally attended a Blossom event. Those usually involved lots and lots of alcohol - and where you didn't mind if got muddy, bug bites or the likes.

So, I want to tell you about the music - but there's a little more too, so I'll break it down into three categories

Blossom has been a part of my life - most of my life. And I have some ties to it, not just for music. An uncle was instrumental in getting it built - and as it is the summer home of the Cleveland Orchestra, which he was actively involved with - there was a nice garden dedicated to him. The garden has changed / lessened, but it is still name for him.  And a friend and neighbor was the architect who designed the venue.

The grounds are lovely. The food choices are questionable (I got a hamburger, but I'm not sure what 'donkey sauce' is. Nor do I think I want to know - and yes, I've run through all of your potential jokes in my head.) The parking and traffic patterns are atrocious. The bathroom situation??  UGH.

Well, like many large concert places, women stand in line forever. Blossom has always had women sneaking off into the woods to squat, or barging (yes, barging) into the men's room. I was happy to let a woman pushing another woman in a wheelchair in - and ahead of me. But the other dozen women in line  - in the men's bathroom - were drunk......and fucking rude.

Yes, they were yelling at men in or own bathroom. And in the stall next to me? Two girls (not women) taking video and selfies of themselves, while loudly talking about - and I kid you not - their 'buttholes'.

I'd bet one-hundred billion dollars that the majority of these women - and men not saying anything about them being in the restroom - staunchly oppose any transgender bathroom laws. And I'll double that bet by getting that they don't see the irony in that stance versus their actions.

Having never seen DCX, I figured this might be the only time to do it. The show was a little over two hours long and packed with two dozen songs (or so). There was little talking, and mostly filled with song after song. And when there was talking, it was Natalie Maines doing it. Neither of the other Chicks uttered a word - not even a 'thank you' or 'nice to be here'.  Maybe the lack of communication ties into something bigger as the band is doing zero press for this tour.

"The Long Way Around" was the perfect selection to start the show, but it's a tough song....it starts low and builds. Vocally, it's probably a better song mid-show.  By no means was it bad (and it's one of my favourites), but compared to the rest of the show, it was on the weaker side. Maines' voice soared to record quality after the first song.

Sonically, the band was solid, the vocals were good, the selections were mostly predictable - not that I'm complaining. They only had four albums and no new material in a decade, so their selection were somewhat limited. They had a few covers and a few deeper cuts, but for the most part they stuck with the hits - of which there were many.

The crowd in the pavilion reacted as expected for most of the songs. You could tell when it was a deeper cut or a cover song they didn't know, as the crowd would mostly sit down.

And there was an acoustic portion as well - and that went over well......for me. Sure they did a few hits there too, but they took on a Beyonce (I know, right?) song from her new album. I had nothing to compare it to, having never heard the original. Had they not said beforehand who they were covering, I might have liked it more. It's awful, but I prejudge on anything Beyonce.

I was much more into their cover of Patty Griffin's "Don't Let Me Die in Florida". DCX have done a number of Griffin songs on their albums over the years - and Maines did one on her solo disk. Her music fits their style perfectly.

There was one instrumental where it was just the women - no band - and they incorporated "Single Ladies" and the White Stripes' "Seven Nation Army" into the mix. It's doubtful most picked up on the latter.

And since I like twangy - I thought they did an excellent job on "Truth No. 2", "White Trash Wedding" and "Sin Wagon" (possibly the best song of the night). Though "Top of the World" came in a close second....for me.

For the crowd - no song got more reaction than "Goodbye Earl". And the video montage behind that song was interesting - it included a lot of people who committed violence against women - including OJ...and our local (now dead) weirdo, Ariel Castro. But it's the image of Trump that is getting all the media attention (srsly - Gooooogle 'Trump Dixie Chicks", you'll see it).  What you don't hear about it is that it shows up on the screen for all of 4.6 seconds. 710 never even saw it.

They closed the show (or the encore) with "Not Ready to Make Nice". A mixing error muddle the first line or two, but it got cleaned up quickly - and it was done well. I still love that song.

Visually, the entire show was well done. Elaborate but understated....at times. The over all theme was black and white. Outfits and even all instruments were either black or white. The stage was sparse, which for some reason I loved. The other band members pushed off to the side, facing inward, so the three women were at times seemingly alone on stage.

And clearly for months they must have filmed snippets of themselves to be incorporated in weird ways in the background video. 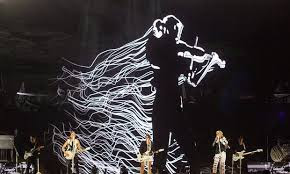 Cars seemed to be a big theme for the video - I'm sure artistically there is a reason, but it was lost on me. So was the accompanying music of Motorhead during one of them, while the Chicks took a few minutes to change.

Some videos were so well timed, that I thought - "oh, there's no spontaneity" because there really couldn't be. Everything was worked to the minute, it seemed. Still the girls seemed to be having fun - though it wasn't lost on me that besides two not speaking - there was zero on stage interaction, save for the instrumental when it was just the three.

The one thing I did notice was that with a large venue, and really turning up the volume, the band lost something they're known for on records - harmonies. It's not that they weren't there, but much harder to hear.

For the music - it was a nice evening and 710 loved it, which is important when I drag him to things like these.

For the crowd - well, it made the evening questionable.

I'm older now, so those fun drunken times I had at Blossom in my youth are gone. And I'm glad for that. But on the walk out, seeing every drunk chick trying to hold up every other drunk chick - and all of them being obnoxious - I turned to 710 and go, "g-d, I hope I wasn't like this.....", but on some level I probably was.

As expected, the crowd was estrogen heavy.....though some of those "women" could stand some high doses of hormone replacement therapy......or and extensive courses in Charm School.

A crash course in fashion would not hurt either. And yes, I'm shaming - sue me.

Sooooooo many females with cowboy hats you know they got at some poorly themed hoe-down for Diabetes or some tragic bachelorette party. And tons and tons of cowboy boots.....many with fringe. And as predicted by me (to 710) on the way in, most of those girls would be carrying them on their way out. ...and they were.

There was no beer under 22oz for sale. And at least at baseball games they don't sell after the 7th inning. Here, it was right up until the end - because what could go wrong with being drunk out in a field parking lot in the middle of the night with 19,000 cars vying for the same two roads?

Somehow I seem to be one of the few who go to these events primarily for the music. Sure I like the ancillary stuff too, but if I had to guess, it was for most - the booze, the friends, the overall experience and maybe then the music.

I bitched about the inching out of the parking lot. Well, I bitched about the assholes who'd try to cut me off. Against logic, I went the opposite direction of home and the freeways. There were a few of us to do this - but seriously, only a few. The other 18,835 cars went left. I turned right and went in a big circle - and was only in the car for one hour and twenty minutes. 40 of that was in the parking lot. This was better than predicted.

I hate to say it, but my youth is gone - on every level. Save maybe seeing a Cleveland Orchestra show out there - I cannot envision ever going back out to Blossom. The external experience brings me nothing and a lesser quality show wouldn't balance that.

As it is, DCX made the trip worthwhile.

I also snapped up tickets to see them thinking this might be a one-time opportunity, plus I wanted to support them with my wallet to thank them for speaking their mind and putting up with so much shit from the country music community. Will let you know how watching their show OUTDOORS in PHOENIX in JULY goes!....

I do love the Chicks, and I am off to Google Trump Dixie Chicks now!

Glad you enjoyed it!!!! I forgot to mention when we chatted - I was really surprised at how many of the locals knew the words to all the songs and sang along. I'm just glad we were so close to the front as the Dutch are freakin' tall and would have made it difficult to see the stage as I don't think we sat down for the 2+ hours of the concert.