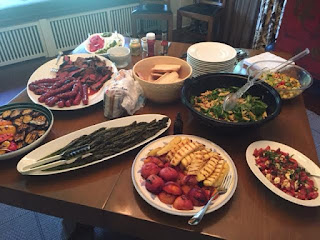 Hope everyone had a nice holiday.

It was ok on this end. Hot weather, bad t-storm (though a cool one) and then nice weather. In that order.

Between yoga and visits to the hospital (my mom is status quo, but still in the hospital) we did go to a Memorial Day cook-out.

The food was phenomenal. In theory, the company was too. Yet, I felt a little out of place.

I cannot quite put my finger on it. I knew almost everybody. Well, I did know everybody - or had at least met them in the past. Granted we knew the hosts better than anyone else in attendance, and I could not rely on them to keep us entertained, they were busy.

Oh, don't get me wrong, everyone was friendly, and while we've known the hosts for a decade, everyone else has known them for 2-3 decades. We were odd men out.

A lot of the afternoon talk centered around politics. That's fine. We are all like-minded in our political beliefs, not that I don't mind a good debate. And I'm ok with local politics. But these guys did a deep dive - talking about state districts all over Ohio. They knew the incumbents, the challengers or potential challengers of every small podunk area in Ohio.  All 88 counties. I'm not a dork (ok ok...that is up for debate), but when they get to that level, I have zero to add to the conversation.

Oddly - but probably not really - the most I had in common with were the 16 and 19 year old boys of two lesbians in attendance. They were actually extremely mature for their age - and very comfortable talking to people they don't know and they asked really good questions and were engaged in the conversations.

I'm not complaining and we had a good time, it was just this type of event comes around every so often to show me how not in the 'in' crowd.

It's high school all over again.

glad to hear your mom is stabilized, but still confined to the hospital. :(

I know how you feel. We went to a "do" on Sunday evening. Everyone was perfectly chatty and fine but we were the only gay couple there and it felt like being at a zoo - i.e. on the wrong side of the fence. Of course it could have been the pink jacket I was wearing.
JP

We had a get-together at Casa Bob y Carlos; lotsa politics discussed, a little bit on the red side, though most in attendance were of the Blue Voting Bloc.
It was a nice day, great food, great friends, great talk .... and then a couples hours of not-so-great cleanup for Carlos and me!

I'm ok being just slightly on the fringe at times. Gives me an out to leave early.

I think we all have these experiences.....even in our (cough cough) advanced age. While I was friendly with, and had plenty of acquaintances in, the various cliques in high-school....I never felt fully at home in any of them. Same thing in my adult life, other than when I'm in India or Africa with the locals.

Unknown said...
This comment has been removed by a blog administrator.
5:27 AM EDT