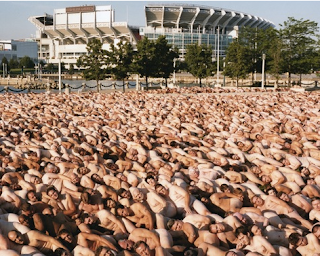 Spencer Tunick is coming back to Cleveburgh.

Every news outlet is making it a big thing - when it really kind of is not.

Tunick is doing another nude installation here, this time during the GOP convention. I suppose it is supposed to be some kind of statement.

I suppose it could be some kind of statement, if he wasn't shooting near the end of the convention timeframe and if he wasn't doing it on private property with no viewing from the public's eye.

You see - if you're not familiar with Tunick's work, he usually does mass nude photos: Paris, Buffalo, New York, Cleveland, etc - and usually with thousands of participants.

Last time, it was all walks of life - or at least gender. This time it's just girls. Real ones, apparently.

Last time, it was open call. You showed up, signed the release, dropped your drawers and you were in the pic. This time, the women have to submit a picture to Tunick and it will be limited to 100 women - allegedly of all shapes and sizes.

Now, I totally get the idea of {and I'm making assumptions on Tunick's vision} naked women and the GOP pretty much saying what they can and cannot do with those bodies.  Of course the irony is not lost on me that Tunick, a man, is picking women and, yes, at least for the installation, telling them what to do with their bodies.

It's doubtful he sees that irony.

Now if the artist wanted to make a statement, then thousands of women on the streets of Cleveland during the height of the convention makes sense. I totally get that with security, crowds and such that he would never ever ever get a permit to do his thing.

I think Tunick does some nice work and I don't doubt the images he takes will be nice, but I'm not making the GOP angle of it to be anything more than self-promotion and PR.

And for the record, of all the images taken back in 2004, this is the "official" shot. 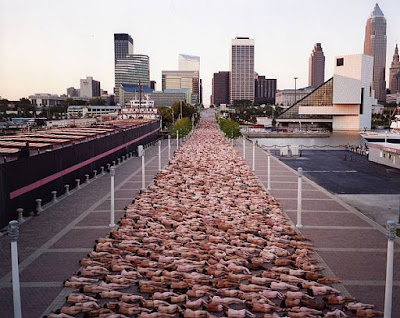 The title image was all guys. Oh, most of them were uncomfortable about being with just guys. Too bad. And oy, was that grass cold! A lot worse than the cement in the official image.

can't pick you out in that crowd there...