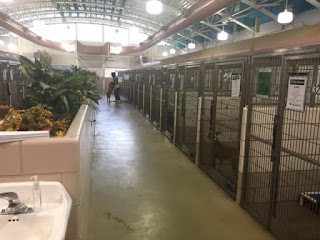 We are both ready and not ready for a new dog.

It's only been two months since "the incident", but we've chatted and the neighbors have been goading us to get a new friend.

I thought 710 might be opposed it all, but he's not. But timing is everything.

We still want to take a good week or week and a half vacation this summer. I'd hate to release a dog from captivity only to put them in a kennel for 10 days. Maybe the dog won't care, but I will.

Still, I troll the doggie websites. Mostly just where we got Sophie. Oddly, on Friday, 710 said, there are other places to look other than Rescue Village.

So yesterday, we were going to a movie (more on that in post early this upcoming week), and were way early for the movie, so we just drove down the end of the street the theater resided. Lo and behold, the last building was the county dog shelter.

We had no idea. I knew where the APL was, but that's even a different shelter.

I think like a lot of shelters anymore, at least 60% of the dogs are pit bulls or pit mixes. Those poor guys. I know a lot of them get a bad rap just by being the breed.

I know project, but some of those guys looked oh so sad. I wanted to take them all home - or most of them. But only one I went back and looked at twice. 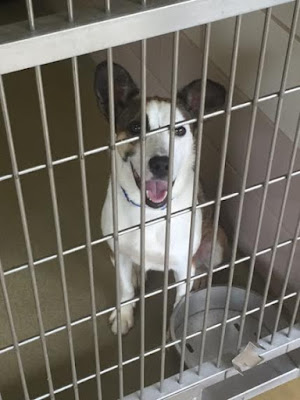 Estimated to be 2 years old. But look at that face and those ears. She is so cute.

I know you're not supposed to put your fingers in the cage, but I did. I got licks. Not just from Roo, but all the dogs I did that too.  710 just shook his head waiting for me to get bitten.

Whether Roo is the right one or not, I'm still trying to figure this out. If we got a dog, I think we'd want to spend a week with her / him just trying to acclimate them. To get one on the weekend and then leave for work on Monday would kill my spirit.


...and it appears that we haven't seen Caitlyn Jenner lately is that she is an Animagus 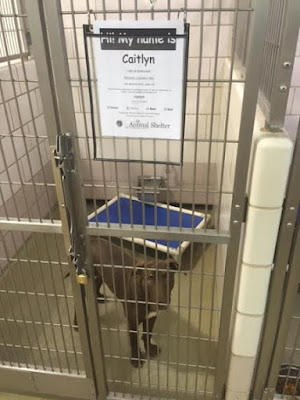 If she's locked up and in a shelter, she certainly can't make more bad "reality" television.

Roo is a cutie, though.

Roo!
Roo!
There is no perfect time. We all have to go to work within a day or two.
Roo!
Hell we adopted Abner, the one eyed poodle, with all his healing post op surgeries the day before I was leaving on a week long trip leaving the better half here with his chaotic work schedule and Abner turned out fine. So did we.
Roo!
(But then again this advise is coming from someone with six)
Roo!

Check your local Ridgeback rescue !!!!! You know you need another lion-hunting dog in the 'hood!!!

I am heartily glad you two are getting a new pooch, and from a shelter Bravi