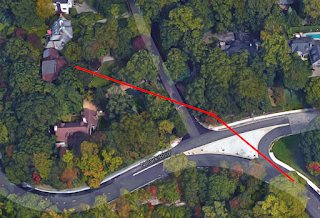 Since we live in such a high class place, nothing ever goes wrong, right?

You've heard about the accidents on the hill. You've seen the cars that come up into the wooded area of our lot.

Clearly, someone thought they could do one better, so they upped the ante.

Heavily medicated, due to my what I'm now calling a cold, I was in bed by 22:00. But the snot back-up was such, that I couldn't breathe, so I dressed and made my way downstairs around 05:00.  After reading the paper, I went and checked email.

There was one from our neighbor, who now lives a few miles away, and his house is empty, but up for sale. In it he mentioned - and I had to metaphorically rub my eyes in disbelief - that someone had run through our yard and his last night.

This perplexed me for a few reasons:  one, how would he know, as he doesn't live here.  two, there is a fence between our yards, so how could someone drive through our yard and theirs? 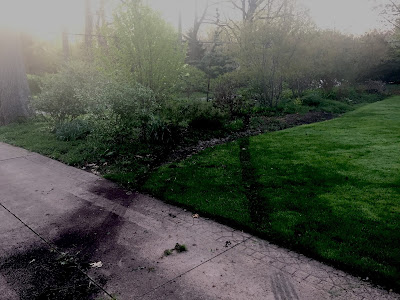 Sure, there were tracks in the yard, but the bushes and trees seems ok.

....until I went on the street side.  There was some major damage to bushes, trees and the front tree lawn.  Curses.

I walked back up the drive. That fence question I posed earlier? It solved itself - a portion of the fence was down....as were more bushes, on both sides of the fence. 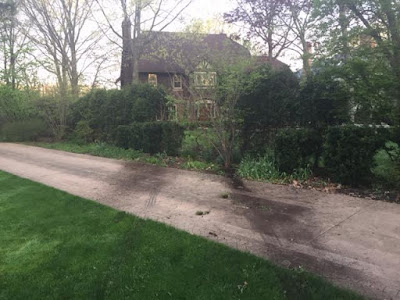 Our neighbor clearly took a greater hit, as the car (well, "borrowed" pick-up truck) came to stop....inside the house itself. 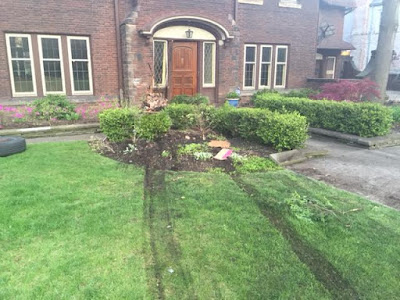 You can't quite tell from the pic, but a good chunk of bricks are gone, the door was just propped up in the opening, the frame shattered.

And across the street from us, I noticed big portions of a tree down. I went in and called the neighbor across the street. He knew nothing of tree being down. From a window he saw two bushes ruined, but no view to what I was eyeing.

The more I looked, the more questions I had than answers. I went in and waited for 710 to wake. So like CSI, we retraced. 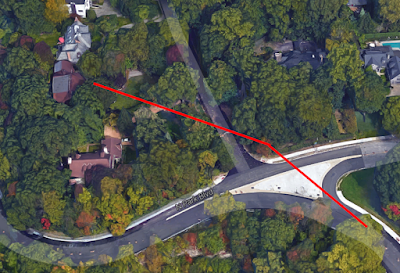 Start at the bottom right. The car came up over the ceee-ment island, somehow between two of the directional signs. He crossed the street and into the one neighbors yard, and somehow went between two trees. Then it was out the other side of the yard, taking down part of that tree, across the street, across our tree lawn, up into the beds, across the driveway, through another bed, through the fence, across the neighbors lawn and into their house.

I was so hepped up on cold meds, I was o-u-t.  I heard nothing. Nothing, I tell you.

Later, one of the neighbors said something about an alarm, and I kind of remember thinking I heard a car alarm that wouldn't go off....but that's it. Around midnight, after ADT and the police called him, our neighbor showed up at our door, but the doorbell didn't work and I was out cold.

I missed the six cop cars, firetrucks, EMS. And the tow truck.

As it turns out, the driver was just wandering around aimlessly in the yard. Theirs, not ours. Apparently he was too high to run...or possibly even know what he did. The cops said the truck smelled of 'wet' or liquid PCP.

So our neighbors house is now off the market so they can make major repairs....and you just know that brick will never match. And we have bushes and trees to take out and replace. I suppose we will have to see if our insurance covers any of this.

I was frustrated, but 710 said we'd be bored if we lived in a quiet little neighborhood where nothing went on.

I'm, on the other hand, am not so sure of that.

Quite a bit to sleep through. I wonder if the insurance for the owner of truck will cover any of the damages, doubtful the driver had insurance or any assets.

All that tranquility and yet ....

Once while living in Florida we we had some friends in for dinner and we felt and heard a loud bang and found that a car had run through the fence and hit our house.
Never a dull moment.

I say it's a good thing you were out on fold mess, otherwise you would have n\been up all night and really there was nothing you could have done. Nothing except be up and stressed.

Yikes. Glad to read nobody was hurt. I sleep like the dead so I'd probably have missed the commotion too.

Shirtless Lovers said...
This comment has been removed by a blog administrator.
8:46 PM EDT

You should totally have some of those huge concrete dividers installed around your property. Sure it'll look like Berlin during the Cold War, but hey... memories. (All alone in the moonlight... You know you were thinking it.)