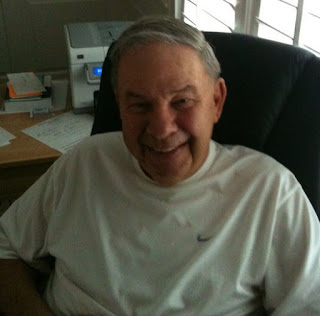 Families are odd things, aren't they?

As you've heard, I had cousins I had not seen in decades, and a decade ago we reconnected and whom I just adore (the jury is out on if it is reciprocal).

Then there are some you were somewhat close with, and now decades have gone by since you've seen them......and you're ok if it were decades more.

Just because you were thrust in each other's lives doesn't make it like you have to like them. And it might not be dislike, just indifference.

I say this all, because my father's remaining brother died two days ago. Possibly three. It's not like there is a lot of communication there - nor has there been for 30 years.

Short version: after my grandmother died, there were tense discussions, words said, and silence. Decades of silence. In a way, I secretly believed my father and his brother, Eddie, talked and their wives just didn't know it - or ignored it. But then, I'm not so sure.

Eddie would have been about 10 when his brothers went off to war.  ...then to college. And even though he was 11 years younger than my father, Eddie got married earlier. Like He Who Must Not Be Named - no one dares utter his wife's name aloud.

For those who read this, but have known me and met my father, the resemblance between the two are eerie. Not so much in earlier life, but definitely after 70.

I may have told this story before, but I will do it again. I was planning on doing it at my father's eulogy, but wouldn't you know it, Eddie showed up....so while I thought the tale was funny - he might not have seen the humour.

So about a decade or so ago, my father had a heart attack. Without the time to get a lot of personal history, they took him in for this cath and stent. Afterwards, I was with him in recovery and the doc came by to get the 4-1-1.

The doc asked if there was any history of heart disease in his family and he answered 'no'. I go, "you brother just had a quintuple bypass".  And without missing a beat he looks at me and goes in all seriousness, "yeah, but we're not close".

While the story would have been funny, his brother might have taken it as a jab, and honestly my dad didn't mean it that way.

I feel bad for Eddie's kids, as I know what it feels like to lose your father. And while I haven't had touch with his kids, my cousins, for just as long, I did drop one of them a note yesterday.

Song by: Toad the Wet Sprocket
Posted by Blobby at 12:09 AM

I don't care what anyone says, this is funny:
"The doc asked if there was any history of heart disease in his family and he answered 'no'. I go, "you brother just had a quintuple bypass". And without missing a beat he looks at me and goes in all seriousness, "yeah, but we're not close"."

I think you know as well as I that the note will be appreciated whether it is acknowledged or not.

I've held grudges against a particularly nasty family member for years. I took great pleasure that I outlived her. Now, I clean her grave. I've moved on. I was going to write that it's because no one else will do it, but I thought it would make me look less gallant so good thing I didn't write it. Life (and death). Funny, ain't it? I'm glad you sent a note.