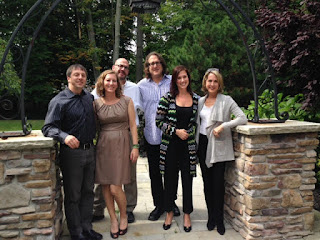 I don't really have anything planned for today. No burning hot subjects - serious or not.

I have to say, I have fun cousins. Actually, I have good cousins on both sides of my family, but I interact more with the paternal side - as all of them are fun.

On my mother's side, I have some fun ones - though some are wildly conservative. At least one. Jack is closest to me in age - born 3 months apart. But going by his political rants, I just don't know how we'd ever have a logical conversation again. As it turns out, he never ever shows up to family events, so I'm safe.

There is this odd thing regarding two sets of cousins for all of us, that is. Not just me. Two groups of people who have no true knowledge of the other. They don't meet. They don't interact. And two very different personality groups.

With my cousins from my dad's side - I'm going out on a limb that none of you (and I do mean none of you!) - have a string of group text messages that just go back and forth.  ....and possibly on and on and on.

And when I say 'group', I mean seven of us.....plus some ancillary folks (not that I really consider spouses as ancillary).

It started off innocently enough - how to get a cousin's weekend. It didn't take long to get the conversation to deteriorate.

Sometimes it is a flurry of activity. Sometimes it's dormant for days....or weeks. Most of the entries are quite amusing. Ok - the guys are amusing. The women basically tolerate us. You know there is a LOT of eye rolling going on the other end of the line.

However, not as much as when spouses get linked in - and they are helpless bystanders thinking "what have I gotten myself into???"  The eye roll increase ten-fold. Only Billy had the gumption to actually take some of those folks off the distribution list. He's a brave man, that one (but don't tell him, it will just give him a big head).

The entire group gets me to smile and more importantly, laugh.

I don't dare erase the text chain. I did that once before, losing some good material, but only because a spouse did not appreciate being included in lots of back and forth........while attending a funeral.  As if we knew! I only erased the chain because I wasn't sure how to take off individual people.  Stupid technology.

As much fun as the texting is with these guys - I'm looking forward to a potential autumn get together.

Song by: Electronic
Posted by Blobby at 12:08 AM