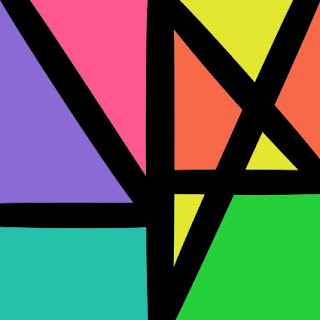 Going by the looks of the album cover, some of you might be thinking "he's already done this before". And in a way, I have.

Last October, New Order put out their first album of new music in a decade - Music Complete. Seven months they follow-up with an album of extended remixes with Complete Music.

Being that they're - for the most part - an "80's band" and I'm a homo, it's somewhere in the bylaws that I am required to buy this. Somewhere on the third floor I have an entire container of 12" dance remixes. It's quite sad.

I've enjoyed Music Complete, for the most part, so when they announced Complete Music, I automatically pre-ordered, but I always do with New Order, so I'm kind of their target audience.

If I had to encapsulate my review to a sound byte, it would be: "more extended than remixed".

When I hear a remix, I usually get a different vibe from the original release. With this album it is more of fuller versions of the songs, not so much different.  Though, that being said, some of the songs benefit from the longer mix. And some do have different elements, though don't change things up too too much.

The fine, but not stellar cuts, are still fine. You are hoping for the remix to make them more interesting - and for the most part that doesn't work, though "the Game" is great.

I really like the first two instrumental minutes of "Nothing But a Fool", I found it way more interesting than when the {pretty much} original vocals came into play.

And I'm still not finding any pleasure in "Stray Dog".  "Superheated" was much better in the original version - the seemingly slightly sped up version adds nothing.

When I think New Order and remix, I think of "Blue Monday" and "Bizarre Love Triangle".  From their original form to the alternative versions songs hat they became, it really transformed them. I didn't get that with most anything here.

The extended versions make some of songs seem more whole. And some of those intros are really great, but once you get to the vocals, little changes from the original album. With a little time and effort this could have been an incredible album.
Posted by Blobby at 12:13 AM