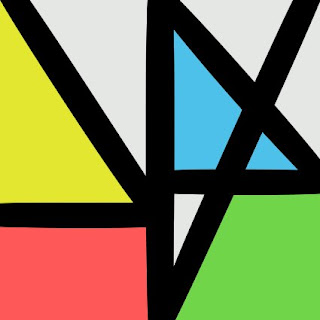 I know I just did a Record of the Month. But I'm getting this out of the way early.

It's been a decade since New Order has put out 'new' material. The 'new' is in quotes, due to the fact that the band released outtakes from their last recording sessions for Waiting for the Siren's Call. Eight songs made it onto the 2013 disk, Lost Sirens, but it wasn't technically 'new' material.

I've been waiting for a long time for a new New Order disk and they don't really skimp.  11 songs, 65 minutes of music.

Music Complete is their first disk without bassist Peter Hook, who was co-founder of both Joy Division and New Order. His presence is sorely missed.

The album also reunites original keyboardist Gillian Gilbert (who is married to the band's drummer, Stephen Morris). Gilbert also did some work with Joy Division, though was not a band member.

The band released the first "single" (do those really exist still?), "Restless", back in August. The song breaks no boundaries with the New Order formula, but I like it a lot. And while you easily hear the bass line, it is not Hook.

The second download, prior to album release, that I got was "Plastic". Some music magazine called the song  a “...gold-plated, weapons-grade Eurodisco anthem”.  It isn't.  It maybe Eurodisco. It's not an anthem, and it certainly isn't weapons-grade. What it does have is the electronic beat of Madonna's "Future Lover" who herself lifted it from Donna Summer's "I Feel Love".  And admittedly, it took more than a few listens for me to really like it.

And the thing is with New Order - when saying Eurodisco - I saw them more as making club music, not dance music. And yes, those can be mutually exclusive, though I'm sure there is / was crossover. This possibly can be exemplified the best here with "Stray Dog" - music by New Order, spoken word by Iggy Pop. The song ranks low on the track here. I get that everyone thinks I should love Iggy Pop, but I never have. Never have I seen his appeal.

Pop isn't the only guest. Brandon Flowers appears on "Superheated".  I get that New Order is a huge influence for the Killers, but I've never felt the band to need "guests". There are a handful of other outsiders participating on this disk, with only four songs being solely New Order.

Maybe it is coincidence, but those four ("Restless", "Academic", "Nothing But a Fool" and "the Game") are more guitar driven. And maybe not coincidentally, these might be the strongest four songs on the Music Complete.

Still, I like "Superheated". And except for the line "did we ever kiss?", the song could just as easily be a message from Bernard Sumner  (and the band) to the departed Peter Hook or any romantic partner. This song too took me a few listens to appreciate it.

With "Tutti Frutti" maybe it's the vocal nod to Technique, or a slight bass line from Frankie Goes to Hollywood. It's a fine song, but nothing great. It registers lower in my playlist. It is down there with "Stray Dog".

"Singularity" and "Unlearn this Hatred" are good (the latter more than the former) and Tom Rowlands certainly brings a little bit of the Chemical Brothers to the table with both songs.  I swear "People on the Highline" uses a bass line from the Clash's Sandanista! and it seems to go on much longer than the timing says - yet it doesn't seem to go anywhere at all.

Overall, I am happy with the release - at least the majority of it. Not overjoyed.  Bottom line is: I could have done without so many outside participation (though I might overlook "Superheated") and the loss of Peter Hook is palpable.
Posted by Blobby at 12:05 AM