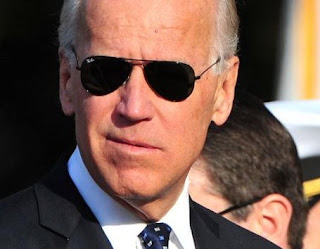 In theory, I think Joe Biden would have made an excellent president. In reality, I just don't know.

History has rarely been kind to vice-presidents who ascend to the higher-ranking position (not via assassination or political/criminal scandal).  Nixon and Bush 39 would be two of them. Most who run, never make it to the Oval Office (Humphrey, Mondale, Gore).

Biden, I think, has been more a part of the president's administration than most VPs. Normally they are punchlines and not given much to do other than vote on a once-in-four-lifetimes tie in the Senate.

I still think Biden was used at a test balloon for Obama's announcement on same-sex marriage. It never occurred to me that his comments were a 'slip' on Meet the Press. It was a gauge on how the American public would react.

I'm sure I mentioned it, but there was a decent chance of our marriage being at the Naval Observatory (the VP residence), back in 2010.  Jill Biden is the cousin of a friend and she and the VP were fine with us having it on the grounds, though lack of time for security clearance could be arranged. Or so they said.

As gaffes go with politicians, his were mild, but accurate. Rarely did he say anything that wasn't true, nor was it usually vulgar. He's not Dick Cheney (praise be!).

I had to love CNN's stupid fucking quote:

Vice President Joe Biden ended months of intense speculation about his political future on Wednesday with a sudden announcement that he wouldn't seek the presidency.

Sudden? You mean with filing deadlines for many state's primaries due in the next 2-4 weeks?

Sudden? you mean with the VP office SAYING he would make his decision and announcement this week?

Get a grip CNN.

I totally get where Biden is coming from. I saw him on Steven Colbert's new show and thought he presented wonderfully. There were no airs about him, he admitted his potential weakness as a candidate - that if you can't be all in, you shouldn't be there - and he wasn't sure he could be all in.

It's hard to say if the other candidates are all in, but it's highly doubtful any of them would ever admit such a thing.

I think Sanders has Clinton needing to lean more liberal - which I'm ok with. I like Bernie, but he's not truly electable. He won't win the Democratic nomination. He might make a heck of a VP.

The obvious problem with Biden running would have been him splitting the votes with Clinton, making it difficult for either to be a clear winner - and potentially weakening the Democrats chances in November 2016.

I honestly would have liked to see Biden in the race. I would have like to see him win - the nomination and general election. I think he's more ethical than most out there and with a backbone. But he's not a Washington outsider........because what we as a country really want is a fucking neurosurgeon who can't talk to people about foreign policy leading this country.

Sorry folks - you WANT an inside-the-beltway kind of guy or gal. Having a no name running this country is ripe for disaster. A bigger one than we have now.  (And the reality is, an outsider's advisers would be insiders anyway - and pushing their own agenda on a less experienced person.)

I do disagree with something Biden said yesterday:

"I believe that we have to end the divisive partisan politics that is ripping this country apart, and I think we can."

I'm talking about the "I think we can" part.  I agree with him on the section of it ripping this country apart.

I think with suturing the country back together, that ship has sailed. I don't know what fucking 2012 / Deep Impact / Day After Tomorrow / Independence Day / Ishtar / John Carter disaster would have to happen to set aside partisan politics, but it would have to be of epic proportions.

While Biden still might be grieving the death of his son, as time goes on, I think he will be much happier with his decision. The man has done a lot for this country - he has nothing left to prove.

"While Biden still might be grieving the death of his son, as time goes on, I think he will be much happier with his decision. The man has done a lot for this country - he has nothing left to prove." - RAMEN, bro!

HEY - I take umbrage with your characterisation of 'John Carter' .....wish they had the funding to continue movies of the entire series! That being said, I agree with the other movies being used as references for absolute shit.

Well said.
I, too, would have liked to see him run, but understand his reasons for not doing so.
Thanks Joe.