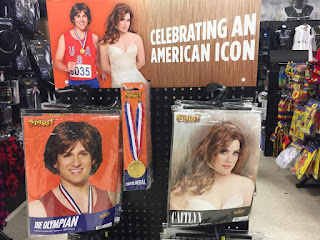 If you read for content over the last decade or so, and have a high retention level, you might remember that Halloween is not my holiday.

I do love how folks embrace it and go all out - but I've never been "that guy".  As I've said, I can think of two times I've dressed up in the last 30+ years.

Tomorrow it will be three.

Our new neighbors - gay, the both of them - are WAY into Halloween. Markie has been counting down the days - literally - for the last four months. His partner refused to let him start decorating the house until Oct 1, much to the displeasure of Markie.

So Markie and Scott are having a Halloween party - costumes heavily encouraged.  Curses! {say that like Mojo JoJo}

710 is off the hook, as he had a planned trip to see his parents. I considered either not going at all or not going in costume - what were they going to do, throw me out?  No - they'd just mock me. But I'm gay,  I've been mocked forever - this would be nothing new and doubtful I'd hear any original material.

That said, I did start thinking of what I could wear - should I go that route.

I did not choose the title image choices for any number of reasons.

First - I think it would imperative going as a team: one as Bruce, one as Caitlin.
Second - there'd be a fight over who would have to be Caitlin.
Third - for either one, I'd have to shave my beard
Fourth - the gold medal is extra !!!

It really came down to I am not shaving my beard for any costume. Or getting my junk cut off. Both seemed excessive. Though to be fair, Caitlyn hasn't cut off her junk either. Allegedly.

But I did come up with an idea. It's not horrible, but it is not out of the ball park either. It will get some chuckles, I'm sure.

I would have been happy to share a preview with you today, but a screw up (on my end) with delivery means an integral part of the outfit won't be here until late afternoon today.

And I'll have to "dress" early, as we have the possibility of trick and / or treaters and then as soon as that is done with, it is off to the party.

I like that it has an end time. So people won't be hangers on......and I know, inadvertently, I can be one of those. And since I'll be a single parent tomorrow, I'll have to get home to let Mr. Pete out to pee.

No worries - you will see pics in an upcoming post. Unless they all suck - then I deny everything.

this ought to be interesting...

Shaving for a costume, good choice to say no. Besides Wonder Woman always looks better with a beard.

Finally! Another 'mo who isn't into Halloween.

I have not dressed in costume, or attended a Halloween party in eons.

... gave me my morning spit-take, and for that i thank you, sir!

Nothing like a little peer pressure from the gay neighbors to get you out of your non-Halloween shell. ;-)

I think I love you just for the Mojo Jojo reference!