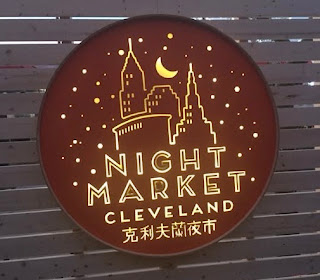 This didn't need to be timely anyways, as the event would have been over before I wrote about it.

As Cleveburgh expands and becomes more lively, there are more evening things to do. Now, I will freely admit that many a night, 710 and I are home bodies. I like to cook dinner, and we like chillaxing with Sophie and Petey.

I know people think gay life is one big rave after another - but it's just a lie. I mean, except for the meth-heads. For them it is all one big party......until they OD.

Anyhoo...... we were asked to attend Night Market, which is a new thing in 2015. It runs down part of a street through our Asian Town. I don't think we can call it "China Town", as there are Vietnamese, Indian, Korean, etc places in this area of town.

This turned out to be the last one of the season. There were only four planned, as they didn't know how the turn-out would be. Allegedly the first had about 500 folks. The second closer to 2000. This last Friday was probably closer to 5000.

So Night Market is gaining momentum. Big time, I would say.

Ruckiry (not Jon's boss), we got there relatively early. So we had little wait for the things we wanted to sample. I stayed away from the Indian food because. well..........I wasn't sure of the bathroom situation. And I don't mean to stereotype Indian food into becoming gastrointestinal distress, but really - why risk it?

And unlike David and his wife, I did not try the squid or octopus.  {shudder}.  And....see paragraph above!

There were lots of food vendors, but also businesses (well, a few), there was also clothing, art, and performing art. 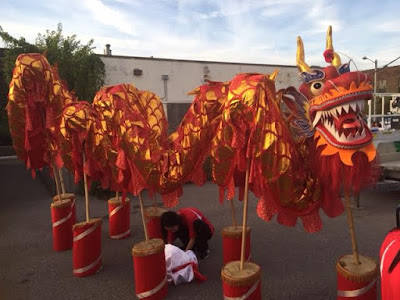 Sadly, they only brought this out for display. I was hoping to see folks moving it through the crowd.

They had really good music. A number of American songs done in Japanese, Chinese or the likes. But they had some of their own music as well. Most of it was not SoundHound-able. Trust me, I tried.

I did get one: the Cambodian Space Project.

HOW are you not going to love a band with that name?

I almost used it as my last song on My Music Monday for songs I dance to. That would be kind of a lie. I mean, I did groove to it - much to the delight of David, his wife and their two friends, Carlos and Sonya (sp), but before that night, I didn't know it.

But their song, "Dance Twist" was fun. I hyperlinked it there for you.

I had iffy Pad Thai. But I had one of, if not the, best egg rolls ever. Actually, I had three of them.

It was fun to people watch, and as David pointed out, it was a place we didn't run into anyone we knew. That is not such a small feat anymore - so it was nice to just hang - and I always love being with his wife. Though the reality is, she and 710 are cut from similar cloth, while David and I are.....wellllll....David and myself.

Oh - and I got to see this little guy. 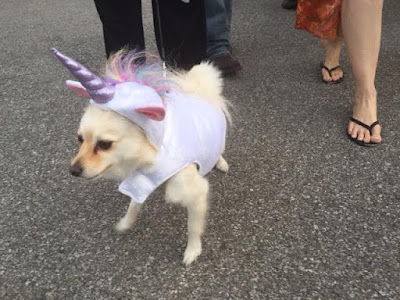 If dogs do feel humiliation, I felt bad for this poor guy. I'm sure I wasn't the only person to take his picture.

We stuck around for a little while longer, but mostly just to catch the light and the sunset. Sounds like a nice event. Its probably good that they only scheduled 4 of them. If it were every week then it probably wouldn't be well-attended every.