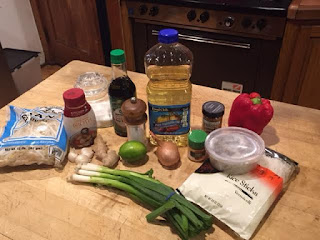 There are a LOT of ingredients in today's recipe. But with simple planning and some prep, the dish actually comes together quite quickly. It's really all about the prep, because things move pretty quickly once you get started.

Today "we" are making Singapore Noodles - even though it's not a "we" and it's not "today", as I made them a few weeks ago. I'm just trying to pace myself on cooking posts, as I know some of you (Morty!) skip over them.

I'm not going from an NYT recipe, but one from America's Test Kitchen.

Cooking with both curry and shrimp are a first for me. I've never done either. Cooking seafood scares me - as it is easy to fuck up, and pricey to do so. And I wasn't off to an auspicious start at the seafood counter, where some guy (who worked at another counter) refused to help me and sent to to the frozen shrimp case. Ruckiry (not Jon's boss), a manager overheard him, consulted with me on what I actually wanted, got it and then pulled the guy aside.......so I would have loved to have heard that conversation.

Neither the shrimp or curry gave me problems..........exactly. But more on that as we go. 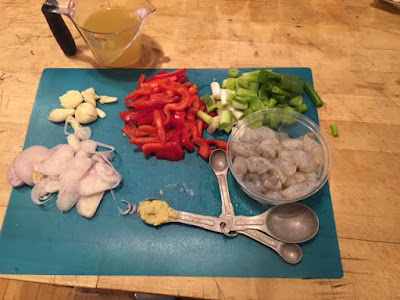 I really did prep most everything before I truly started. It takes a little while, but worth it. I could have done more prep, like ATK, but I don't have 1,003 little cups to put one-eight of a teaspoon of a spice. 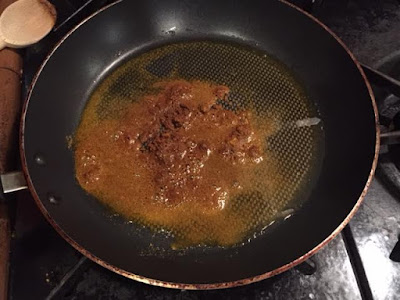 Heat 3 tablespoons oil, curry powder, and cayenne, if using, in 12-inch nonstick skillet over medium-low heat, stirring occasionally, until fragrant, about 4 minutes. Remove skillet from heat and set aside.

Christopher Kimball said (on the show) he thought it sounded like a lot of curry, but it wasn't when he ate the dish. I think it was a lot of curry. It overpowered most everything (more on that later). Personally, I might cut back a little. 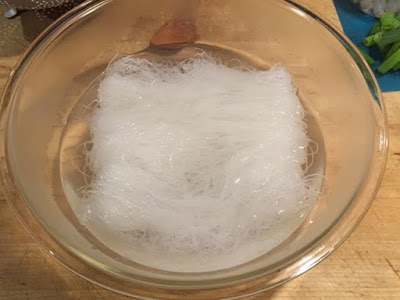 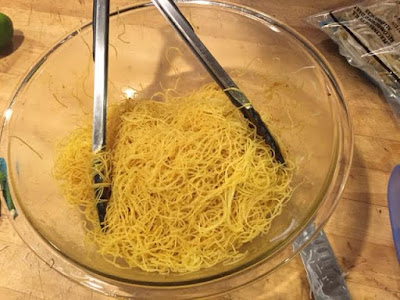 Transfer noodles to cutting board. Using chef's knife, cut pile of noodles roughly into thirds (so much easier to handle while eating bc of doing this). Return noodles to bowl, add curry mixture, soy sauce, and sugar; using tongs, toss until well combined. Set aside. 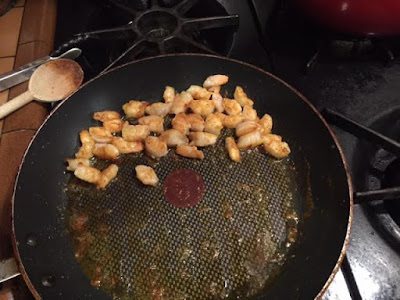 Wipe out skillet with paper towels. Heat 2 teaspoons oil in skillet over medium-high heat until shimmering. Add shrimp in even layer and cook without moving them until bottoms are browned, about 90 seconds. Stir and continue to cook until just cooked through, about 90 seconds longer. Push shrimp to 1 side of skillet. 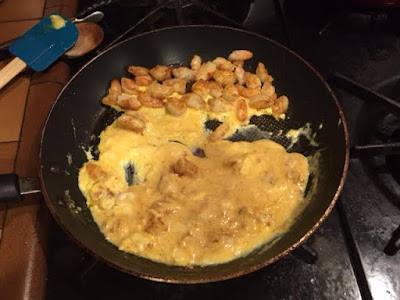 Add 1 teaspoon oil to cleared side of skillet. Add eggs (which I forgot to add in the title image pic) to clearing and sprinkle with 1/4 teaspoon salt. Using rubber spatula, stir eggs gently until set but still wet, about 1 minute. Stir eggs into shrimp and continue to cook, breaking up large pieces of egg, until eggs are fully cooked, about 30 seconds longer. Transfer shrimp-egg mixture to second large bowl. 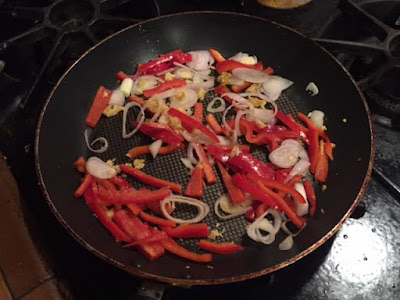 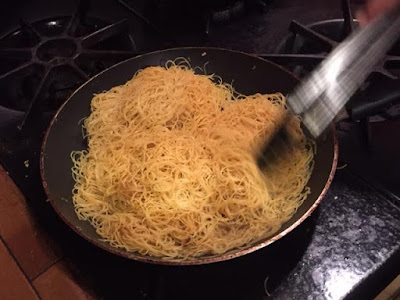 Return skillet to medium-high heat, add broth to skillet, and bring to simmer. Add noodles and cook, stirring frequently, until liquid is absorbed, about 2 minutes. 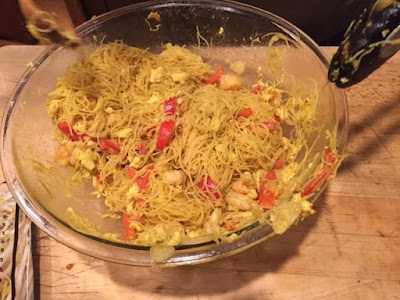 Add noodles to bowl with shrimp and vegetable mixture and toss to combine. 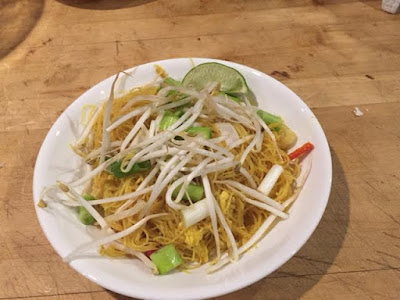 
In theory this dish should be great.

It was light. It had protein x 2. It had some burn to it. Quite a bit. Oddly, I'm not really sure it was the curry, ginger or cayenne (though those probably didn't help matters). I think a lot of heat came from the chopped scallion. I know they're supposed to be mild, but I think these weren't.

Maybe due to competing flavours, I could feel eating the shrimp but without much (if any) shrimp taste. I never felt or tasted the eggs.

Much of the work in this dish came afterwards - the de-currying of the kitchen, much like NBC and Matt Lauer did to Ann.

The next two days, I ate leftovers for lunch - minus the scallions. The flavours were much milder and had longer time to infuse together. Maybe everything was too fresh right off the skillet, but how was I to know?

I'd say the shrimp was the most expensive thing there, but really it wasn't ($5 for 12). The small jar of curry I got was as much.

Overall, the dish was ok. Not outstanding. It was a lot of work - more than ATK made it seem to be. I'm glad 710 got home for the last half to help me execute some of the things that seemed (but probably weren't) time sensitive.

I might make again here and there, but it won't be in normal rotation.

Still, I like expanding my skills and trying new things. It hasn't turned me off from doing such.
Posted by Blobby at 12:05 AM

I can smell that all the way from London.
JP

I wonder if Mitch and Tara would like it.

I love curry and spices of all kind.
Now, as for shrimp, I have an Ina Garten fool-proof method for cooking them--if you want them whole and not cut into piece:
Toss them in oil and whatever spices you like and bake in a 450-degree oven for seven-and-one-half minutes.
Perfection.

Sounds very similar to a stir-fry we do every couple of weeks....set-up is a bit labour-intensive as we get everything into little glass bowls first, and then it's just a matter of adding the right ingredients at the right time, and juggling the various items in and out of the wok as they cook. We have it down to a ballet in the kitchen (you don't want to watch as the boys try to get into the action), but it's damn tasty....and you're right - the leftovers are always better because the flavours have a chance to melt together.

ATK recipes are always more difficult than you think they will be.

Greg is one of us!

...the de-currying of the kitchen, much like NBC and Matt Lauer did to Ann.

OK - thank you Will J. My reference was not wasted.