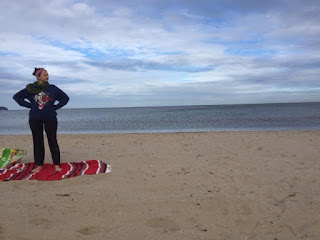 Yes, I am aware that Summer has been over for a week or so now.

Oddly, we are having some of our best and most stable weather of the year in these last two to three weeks. Bright blue skies. Good temps. Low humidity. And until a two days ago, little to no rain.

It makes up for the cold, sopping wet start to the Summer season. After yoga on those days, we were drinking hot chocolate and not iced tea. We were chilled to the bone.

But Autumn is here - in a few ways.

The days are shorter. Well, actually they're still 24 hours, but the light has shorter hours. The temps are nice, but cooler. Oh, and the Autumnal Equinox came.

So last Sunday was our last scheduled outdoor yoga for 2015.

I have barely stepped inside an actual yoga studio in months. Maybe during an inclement day, but not as a regular event. Ruckiry (not Jon's boss), my plan is kind of a pay as you use your package of 10. So I'm not losing anything by not going - unless I get to the end of the calendar year without participating in the amount I purchased. I still have a few months.

David picked me up last Sunday and I vacillated between long and short sleeves. I went with short. It was nippy, but not freezing. As it turns out, before the practice was over, it was warm out. Mid 60s anyways.

Since "swimming" season is over, the parks department are no longer raking the beach. This makes for (more of) an uneven practice space.

I had a fairly crappy practice due to this. Finding balance was hard. Hand placement was hard and eventually painful. And then there was the wind from the south blowing sand everywhere - getting in places you don't want sand and flipping over parts of my mat.

It was one of the least attended of the season, but maybe that's not a surprise with questionable weather and a home Cleveland Browns game.

Having a questionable weather day might just be a good way to sign-off on an outdoor practice season. It makes it more clear-cut to reestablish your studio and gym options.

I have to say, I didn't miss the indoor practice that much. It was kind of nice being out in nature. The moments when you are told to close your eyes - I just never did. Looking out at Lake Erie and the horizon was zen enough for me. I didn't need to look inside.

Starting this weekend, I'll be practicing inside.......and closing my eyes as such.

Song by:  the Flatlanders
Posted by Blobby at 12:04 AM

Weird. London weather similar. No beach but we do have the river. I'd rather be where you are.
Jean-Paul
itsmyhusbandandme.wordpress.com

I admire your dedication to yoga.