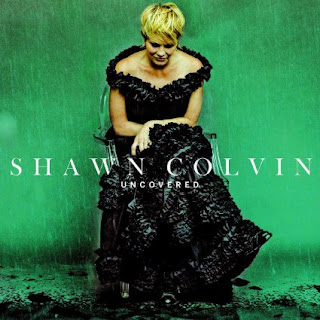 21 years ago, Shawn Colvin put out an album of cover songs - Cover Girl. It was actually pretty good. She walked the tightrope of doing songs that weren't extremely well known to many people and yet still made them accessible.

21 years later, Shawn Colvin tries to replicate that model - but with less success with the release of Uncovered.

First off, I will go on record saying I did not purchase this, but it had been available for full streaming for at least a week prior to the album's release. After her last two mediocre studio albums, I wasn't buying this sight unheard. Not again.

With Cover Girl, I knew about one-third of the songs fairly well, so I had the advantage of not having too many preconceived notions of how the songs had once fared.

With Undercover, I know about 90% of the songs well. This doesn't bode well for Colvin.

While I won't say that some of her selections are classics, but to me, they are songs that I love, and some of them that were recorded are not easy to interpret and even less to surpass in greatness. And while I know she's probably working on a shoestring budget, the arrangements and musicians are sparse - leaving too many songs sounding too similar, just in instrumentation.

Let's start with the good:  Colvin does a decent job with Paul Simon's "American Tune". It's not Simon, but it is decent.  John Fogerty's "Lodi" fares ok. I'm not sure it's an acoustic song, but at least this selection has the most 'band' feel than most of the songs here. Robbie Robertson's "Acadian Driftwood" is pretty good.

The bad: None one could truly touch Neil Finn's "Private Universe" and get away with it. This includes Shawn. I know Finn is one of her favourite writers, but still, it's ambitious song at best and it doesn't make the mark.  Ditto with Springsteen's "Tougher Than the Rest". I'm not a fan of Gerry Rafferty's "Baker Street" and I'll give her this, at least there is no annoying saxophone on it like Rafferty's version. I was hoping her rendition would show me that it was indeed a good song, but it just isn't.

And there are 10,001 versions of "Gimme a Little Sign" out there. And most of them have life attached to them. I know Marc Cohen is on the song, but he's so drowned out, I'm not sure why they bothered having him on.

If you want a better version of Tammy Wynette's "Til I Get it Right", even Tricia Yearwood has one with more heart.  It's a heartbreaking song and Colvin doesn't convey any of the emotion.

And that is what is really wrong with this disk - good to great technical readings of the songs, but no emotion, no heart and little warmth. A song evokes a feeling, and unfortunately, too few of these do.

Maybe one day I'll snag this from the library, but I'm not plunking down cash for it.
Posted by Blobby at 12:05 AM

I love Colvin so I might go for this, but I think I'll stick with Neil Finn's version of "Private Universe" ... or any song he sings ... over anyone else's versions.