Top of the World 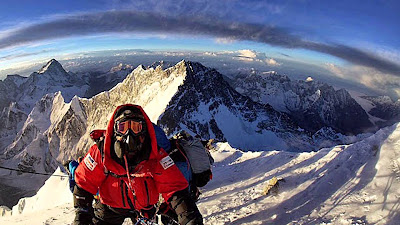 Well, we made it to the top.

I mean, not like in Everest, but to the top of our movie goal. And we didn't have to eke it out like most years.

We were done with said goal before the end of Q3. I will have to reassess the 2016 movie-going threshold.

Though I have to say, film selections for 2015 were pretty good - and we still aren't done. We already have tickets for the opening weekend of the Martian.

Anyways - for long time readers, or people who actually read for content - for decades, I've had an obsession with Everest. Reading, movies, well.......everything but climbing the mountain. The bathroom situation seems precarious at best. Oh - and the climbing thing.

Oddly, until seeing a movie a month ago, when we saw the preview, I had not heard a peep out this movie being in production. But having read the books (yes, the movie was culled from a few), and seeing the David Breashear's IMAX movie maybe 20 years ago, I was intrigued, though I was skeptical it would do any better than his movie or Jon Krakauer's book, Into Thin Air (though Everest does not use Krakauer's book at all).

Actually, as with most movies based on real-life events, liberties are taken. Everest is no different.

While it was briefly mentioned about too many teams ascending the mountain at once, when it came down to it, the movie makes it seem that there were only two, who combined into one.

While it was ever so briefly implied in a 10 second shot, but never explained if you didn't know the story, or infer it from those 10 seconds, many of the climbing teams were inexperienced.

While it was briefly described as a traffic jam of people ascending due to no fixed ropes, the actual bigger issue was people not being able to get off the summit due to multiple teams trying to get up and down the same passage, and added in would be those very slow inexperienced climbers.

Yes, the storm that hit the mountain was bad and ultimately caused the fatalities, but these other circumstances precipitated an inability for a quicker descent.

And since Krakauer's story was not used, his version of seeing a person walk off the side of the mountain in a blizzard is not told, nor was he really a dick by refusing to go help in a rescue effort.

David Breashera's and his IMAX team are mentioned once - barely - and never shown. While he is a producer of Everest, his actual (and real) footage of this climb was way more captivating than anything the director put to "film".

Oddly, the actual story itself would have been better than taking liberties. It's not like the events weren't exciting enough on their own.

Maybe because I knew the details of the 1996 climb, I felt the foreshadowing was extremely heavy-handed.

No offense to the cast, but no one was breaking any boundaries here. Jason Clarke fares better than the rest of the cast. Josh Brolin, was basically Josh Brolin, but in a parka.

Jake Gyllenhaal, as in the majority of his roles, could have been played by anyone - and if the character had "demons" they never explained them.

True that, Family Guy.  True that.

The reality is after the climbers get suited up in their North Face, it's hard to tell one character from another. Sure, they are unrealistic about taking off their gear so often so you can figure out who is who, as there is no other reason to do so.

We saw it in 3-D, which I think helped in some scenes, but you can never truly tell if it would have been less dramatic in 2-D. And there was actually a camera shot of climbers going up while the camera went downward, making it look like they were on an upward escalator. It was odd.

There were all of 9 of us in the theater (see cartoon Jake talking about being a box office drag), one being like a 8 year old who spoke the entire way through the movie and his parents answered every fucking question he asked.

I have to say, after the credits ran (yes, we stay for all the credits), one other guy remained, who goes, "do you think they took him home watch the Walking Dead?'.  I replied, 'probably Schindler's List'. We all laughed. I mean, the subject matter was a little much for an child.

The one thing the kid was spared some of the missing elements: like some of the survivors taking oxygen off of dying (not yet dead) climbers so they themselves wouldn't run out.

710 mentioned the movie, in a way, was a document of the events, and to leave them out was slightly changing history. I don't doubt that these people have to live with their decisions and to have it on the big screen would be horrendous for them - and that lawyers probably got involved.

Everest was ok. But just ok. I get that I had high expectations, but the filmmakers cut corners in a story where the actual story was fine in itself.

This is maybe a C+.  And I'm being a little generous.

Song by: the Dixie Chicks
Posted by Blobby at 12:01 AM

"an 8 year old who spoke the entire way through the movie and his parents answered every fucking question he asked."

those people should be banned from every movie theater in the country!

I got the impression that the star of the film was the mountain and so, yeah, that kept me out of the theater.