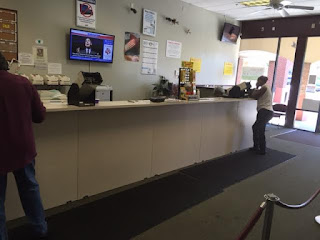 As I rapidly approach senior citizenship, clearly I'm losing track of things. Nothing big - well, depending on who you ask - but just some points in time where 710 said we did x, y and z and I don't remember any of it.

I mean, he's going back years or even decades.

For anyone else you'd be like, "yeah, but that's years or decades ago". My friends will tell you I remember stuff, minutiae even, from any point in time. So, this might be a little blip, but one of those things to watch out for as I slip into dementia. Slowly, but surely.

Three days ago, I get a postcard from the BMV, telling me I'm more than 30 days late to renew my driver's license.

I've {almost} never missed something like this. But sure enough, I was 42 days overdue.

Since it was just 42 days, it wasn't a biggie. Had it been six months, I'd have to take both the written and driving portions of the driver's test all over again. Plus some kind of monetary penalty.

As it was, I just needed $25.75 and to pass an eye test - which was actually more difficult than it should have been. But I need a new prescription. I haven't forgotten about that - I've just been lazy about that.

Speaking of the eye exam - lord, that was tough. The blinking lights were fine, but focusing on what I was supposed to read was challenging, at least for one eye.

And the questions they ask. Honestly, they are new or I am truly not remembering these things:

Do you need contacts or glasses to drive?  Besides you just saw me eke through an eye test. Yes.
Have you always been a resident of Ohio?  Who cares. I have an OH license and just renewing it.
Outstanding warrants, or license suspended?  Wouldn't you have at least the latter in your computer?
Are you currently addicted to alcohol or prescription medication?  Even if I were, I wouldn't answer the question while tying to get a license to operate heavy machinery.

As you can see, those stories of the jam-packed BMV are tall tales. The last few times I've gone there has been almost no one. Though except for the license, most everything you can do on-line, so maybe that's the reason.

So, I got my license, but I laughed when reviewing the information that said my hair was 'brown'.

The woman corrected it, saying they now have a setting for 'bald'.

my spouse also remembers trivia about things we've done many moons ago; I have no recollection.

I find a "to do" list helps; cross off the items as I go. I have completed the 2 items mentioned above; on my list are haircut, pick up reading glasses, renew prescription for asthma inhaler.

In Virginia, my license is good for 8 years and can be renewed online for an additional 8, I'll be in my late 60's before I have to go into the office again.

God, nothing worse than the DMV.
And the smartass in me would have had a field day with those inane questions.

And one would think the BMV (it's called the Revenue Office here in Arkansas), would have a "mostly bald" option as opposed to pure bald. I mean, what happens if you grow your hair out to change your identity?

Just received my reminder from California DMV today, so it is probably time to get an eye exam. My only question is whether the weight is an aspirational or actual number.

Happily the AZ license expires decades from now; I will probably be dead before I have to redo the photo.

So what you are saying is that if you decide that a hair transplant is just the thing that you wish to pamper yourself with, that you have to go back for a new license?