Almost every Labor Day weekend signals the Cleveland Air Show. I say "almost" because with the 2013 federal government budget cuts.

What it really meant was that either the USAF Thunderbirds or the Navy's Blue Angels couldn't perform, and without the jet-power, no one wants to come look as come crappy 1928 bi-plane.  I mean, let's be honest.

And depending on the year, we have either the Air Force's version or the Navy's.

This year it was the Thunderbirds.

Starting at least two days before the air show, they practice, and both the practice and actual show maneuvers brings them over our house - drowning out any silence for minutes at a time. And you rarely see them. By the time you hear them, they are usually long gone. Now and then, between the tall trees I catch a plane or two, but rarely all six.

I might even go down to the air show sometime, but this weekend was in the 90s and standing on black pavement didn't seem ideal for anyone.

The precision with which they perform is impressive, to say the least. So are they - or at least some of them.

Sunday night, we went out for pizza at one of the best Cleveland pizzerias, Geraci's. As we stat outside, waiting for our table - it was unusually crowded for a Sunday evening - two cars pulled in, containing three of the six Thunderbirds.

All three had very nice bodies. All three wore uniforms that were tailored within an inch of their live. I'm guessing you could have traced every vein in their legs through their pants.

And yes, I mean EVERY vein.

Well, a boy can hope, right?

The shirts were crisp and tighter than tight. I'm guessing ironing isn't needed, as the fabric is stretched as far as it can be while gripping the arms, chest and abs. Any wrinkle would be smoothed out from constant tugging and pulling from various muscles - of which there were many.

Yes, all three were nice, but well, let's face it, one stood out. Far and beyond. Even 710's jaw dropped.

Me?  Well, I wondered how to capture him on camera without getting my face pummeled. 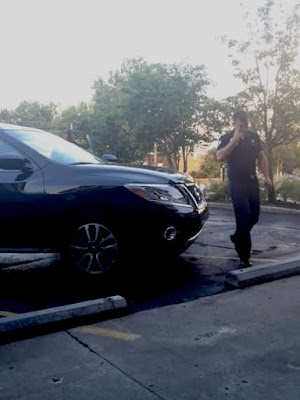 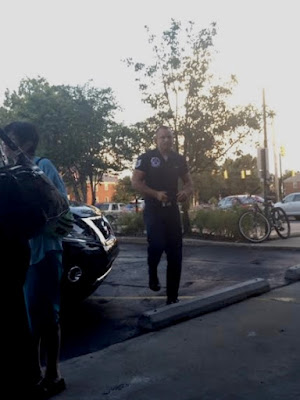 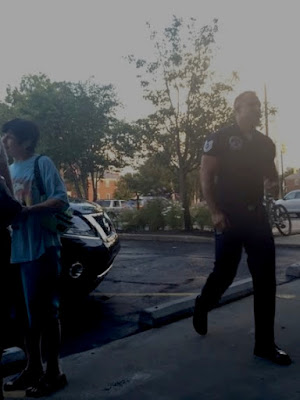 I was fighting a man in motion and a setting sun. It wasn't easy getting any pictures of him, let alone good ones.

Ruckiry (not Jon's boss), he was engrossed by his phone most of the time he was waiting for a table. I joked to a friend he was on Tinder, but he said Air Force guys are pussies, so he was probably on Grindr.  Either way he probably made someone very lucky that night.

To be honest, I felt a little sorry for the guys. They barely got two bites of food at a time before being interrupted by a bevy of patrons. It's doubtful anything other than their first piece of pizza was even warm.

Or, I suppose the guy could have touched it and made it hot. 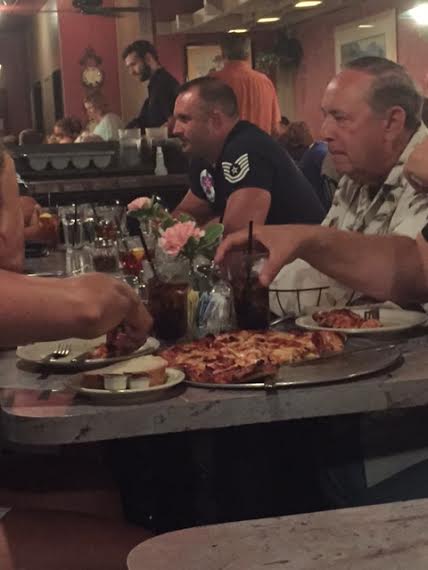 710 thought the T-Birds could have changed into civilian clothes, but I'm not so sure. I think the PR is part of their job. Required even, when they are at air shows like this. And they probably interest more people into the armed services than any recruiting officer setting up table in the high school cafeteria.

As it turns out, the uniform probably saves the military a fortune in meal costs.

The table next to us quietly purchased the trio's meal. That in turn got the oven chef to purchase the meal of the people next to us.

I want the guy at the bar AND a slice o pepperoni please!

Fun to look at, but probably too fast for me. We went to Cleveland a couple of times for the show. Some of the best viewing is from the open top of parking garages along the cliff, with the sun roof open and the air conditioning running.

Yep, he's a hottie. You are right about the sound, they are deafening. (You may want to check the spelling of your title.)

This is so trite,but, "Gosh, I love a man in uniform."

Nom all around.
I had forgotten how much I enjoy the Kultcha and keen observation powers of Blobby.

It seems a better shot of the beard at the bar would have also been warranted. ;-)