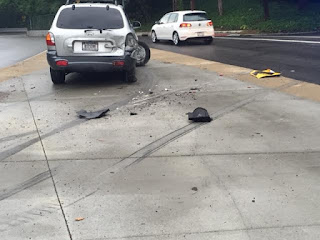 It's happened before. It will happen again.

The crash and bangs happen a few times a week, but normally, and inexplicably, they keep going. The motorist loses control, hits the barrier wall, bounces off and usually keeps driving. Sometimes they try to keep going and find out they can't and just pull to the side.

Then, the ones you hear about mostly, are the ones that end up in our yard. Oddly enough, this isn't one of those tales.

I woke around 04:30 to the post-sounds of an accident. I didn't hear the accident. I didn't even hear the sirens (but to be fair, sometimes when there is little traffic, they won't use them, as to not disturb folks). But I did hear the unmistakable rumble of idling diesel engines of fire trucks and rescue squads. My brain is wired that way.

Sure enough, flashing lights, flares, the works. I went back to bed for a while, but a thunderstorm woke me up shortly thereafter. And I was up for good.

At 07:10, another crash made 710 (yes, this true) jump out of bed. There was a crash on that new(er) cement island I've referenced before. A car and by the time I got to a window, a few people milling around.  I went out to the end of the drive to see a second car limping onto our street. The guy got out, holding his head in his hands - more in pain than disbelief.

Since everyone from the other car was on their own phones, I figured they were calling things in to the appropriate authorities.

20 minutes later, a patrol car finally arrive. 20 MINUTES.  Even though we said there was at least one injury. g-d forbid anyone was bleeding out or anything. And for frame of reference, you can get anywhere - ANYWHERE - in Cleveland Hts in 20 minutes. And the police department is maybe five minutes from us. And it was Sunday at (now) 7:23 when we called it in. So not a high traffic day.

So, just being the Mrs. Kravitz that I am, I walked out to see if it was CHPD or CPD who actually showed (it was the former). But it was then I noticed something odd.

Every single car was empty. Every single person involved in the accident was gone. Vanished.

I walked up to the officer (not cute in any way, shape or form - just my luck!) and he confirmed no one was around. I told him what I had seen, and that we called it in. It was then I found out we were the only ones who called it in.

So all those folks on their cell phones?  Jonesing for other rides. Calling Uber to get them out of there and quick.

What strikes me as odd is that both car occupants were gone. All took off. No one calling to file a police report - even for insurance purposes.

Ok - I get it, I truly get it. Like the last time someone fled an accident at our house, I'm assuming:

But what are the odds that would be with both drivers?

Both cars were inoperable (you can see the perpindicular wheel in the title image). The second car had two baby seats in them. It also had two busted out windows, two flat tires and a hood that was smashed.

My CSI abilities led me to believe that the second car rear-ended the silver car, making it hit the 6" high island (causing the wheel damage) and knocking it onto the island himself. The second car, went across the island (see the tire marks?), took out the sign and crossed the road, limping into our street.

At least it didn't go into our yard.  Again.

I'm always more amazed these accidents don't t-bone another car (like the white VW) as our yard in on the other side of that VW.  To be fair, an accident like that will be the only way they'll do something about safety on the street. Someone has to be killed first.

I did my duty and filled out the police report. Someone came and towed the cars away. I'd love to know the outcome, but I'll never hear a thing.

Later, Sunday night, while waiting to fall asleep, I pondered to 710:  "do you think the Rapture happened and we were just left behind?"

His only reply before turning out the light: "what does that say about us?"

If it's a matter of settling which city that area is in, just look for the nearest manhole cover; that should say on it what city it actually is.

Sounds like Dead Man's Curve at the end of the driveway!