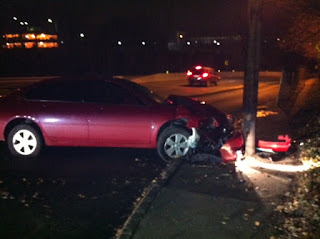 My lord, it happened again, though to be fair, the car never made it into our yard.

If you're a long time reader, you have read about cars missing the curve, careening over an island, crossing another street, hopping the sidewalk and appearing in our yard.

I know I've blogged about it at least three times now. Consider this the fourth.

In May, we had successfully lobbied for some kind of markers or barriers to be put in the island. In August, they were installed - yellow signs with black directional arrows. Cheap, but it should do the trick, no?

Friday morning, we were awoken to a horrible noise before 06:00. I assumed our new construction caved in - until I heard the blaring horn. You know, those TV shows where the wrecked car's horn just goes, or that the dead body is laying on it?  Yeah, that was the noise.

It took me a few minutes to find a sweatshirt and jeans and get my shoes and glasses on - then I headed out while 710 called 9-1-1.

This is what I found: 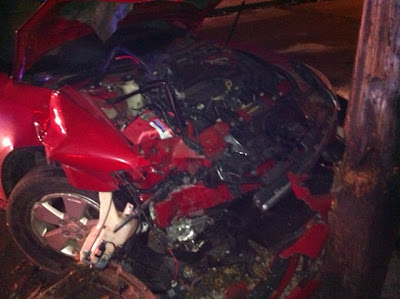 Oh yes, the car never made it to the yard, as it took down two of those directional signs and came to rest at a utility pole that holds are all important Time Warner Cable.  Well, it didn't come to rest there as much as it hit it head on.

But that's all I found there, except for someone who stopped and also called 9-1-1.  Yes, there was no driver to the car. They hopped out and fled on foot - we're assuming.

The steering column was bent by the driver hitting it on impact (no airbags deployed) and the windshield was cracked from a head hitting it.  See? 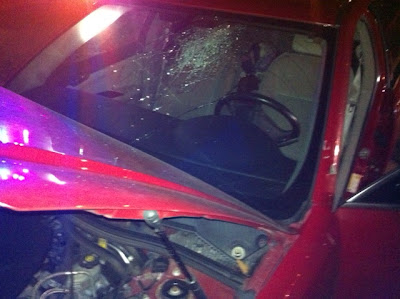 I know it's wrong to wish ill on people, but I'm assuming they had a concussion, a few broken ribs - and I can only hope - internal bleeding.

Some neighbors, who also heard the crash came out and couldn't figure out why someone would abandon the car. I had five immediate reasons:  they were drunk, they were high (probably not an and / or option), no license, no insurance and the car probably wasn't theirs.

They also left a bunch of cash on the passenger seat, which couldn't be a good sign.

My mother, when told the story thought, "oh they might have just been dazed and wandered off - maybe they have amnesia!".   Seriously, mom?  You don't even watch soap operas!

The fire guys finally got the horn disabled, but one of the cops asked us: "was there a driver?"   REALLY?

I said under my breath "no, it's a magical car that just flew here".  My neighbor Sal heard me and goes, "how did you get like this?"

It was a little weird to see the police go up the hill and into our yard, flashlights out, and half-heartily look for the driver. I'm not sure if they thought they were hiding up there or tried to get away and just collapsed. I half expect to find the body in spring - or when it starts to rot and stink.......whichever comes first.

I was cold. I was tired. Traffic was backing up for far as the eye could see and I just opted to go inside and ready to call it a day, before the day had begun. 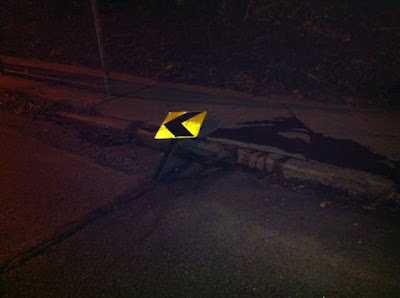 However, I did find one of the markers on how to make the turn.  I have no idea what happened to the second one, but I assume it was either stuck under the car or is on our hill - along with the bumper and other car parts I saw there.

Since the police or anyone don't pick those up, I'll be collecting those over the next few days, weeks or months. I think we're still finding stuff from the last crash.

I bet we will never get replacement signs either.

Song by:  Counting Crows
Posted by Blobby at 6:38 AM

Jeezus. I think your theories are right on. But somebody's going to trace that car and find out, don't you think? (like, the owner, with a big band-aid on his head, will testify that it was stolen just before the "accident.")

I wonder if (s)he fled because he was drunk, had no insurance, or had warrants out.

damn. if only you'd been quicker, you could have nabbed that cash!

Your speculation on the "phantom driver" is right on.
How much of the cash in the vehicle will make it to the property room?
It should have been independently counted.

What a rude awakening in every sense of the word. Have you you thought about surrounding your property with a wall of cinder blocks?

We MIGHT do decorative boulders, but not cinder block. I'm not looking for this place to look like Supermax or anything. Or worse, a trailer park.

I think Dustin just slapped you bitch (or is it bitch slapped) in the comments on CB's blog.

I think Patty Hearst was driving the car.