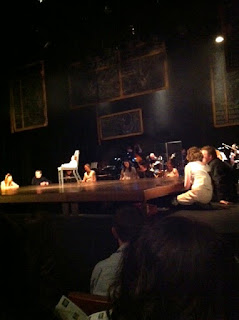 Eons ago, when at an art-house theater, we were with our friend Todd, and his then date, who must have been all of 17.  As we sat waiting for the movie, ads flashed on the screen. One was for a local live theater company called CATCO.  Their slogan?  "Live theater - it won't kill you."

Without missing a beat, I mumbled, "oh yeah? tell that to Lincoln".

Anyway, the day before Abe's 203rd birthday, we ventured out, with friends (not Todd), for live theater.  It only killed us a little bit........inside, where it counts.

A repressed town in Iowa Germany, whose parents demand that their children obey them and not know about or have dancing sex.

It's Footloose, but without Denise Williams and Shalamar.  And while Footloose, I found to be depressing just due to a bad storyline, music and acting, Spring Awakening is just depressing with a capital D.

Seriously at one number, where a teenage girl sings about being beaten by her father and his late night visits to her room, complete with her mother's knowledge, the audience applauds. I turned to 710 and said, "did they just clap for a song about child rape and incest?"

I've mentioned, overall, I am not a huge fan of musical theater. I know, I'm gay and it is in the by-laws, but still I end up tolerating it and that's as far as it goes. It is more of a reason to spend time with friends and go to a nice meal - and the dinner was great!

While I clearly did not see the B'way production, this was pretty amateur. The Plain Dealer raved about it, but for life of me I don't know why.  It was very high school like. One or two of the performers stepped up to the plate, but the main male one did not.  And of course when two gay male characters (and assumed gay actors) made out they seemed into it, as opposed to when the another assumed gay actor, in a straight role, had to kiss {clutch the pearls} a......a........girl!.  He wasn't that good of an actor.

And while I won't say I was a huge fan of many of the songs, all of them had their moments and some were actually ok. Do not get me wrong, this isn't Rodgers & Hammerstein or even Sondheim. I don't see it being at a sing along show tunes night in a gay bar, but what the hell do I know?  I don't know of the man who wrote the book or lyrics, but I know of Duncan Sheik who wrote the music and it wasn't bad - just not what you consider typical Broadway music.

Hey, it was a different Saturday night out for us, so I'm not really complaining. At least I didn't have to stay in and watch CNN coverage of Whitney Houston's predictable death.  Yeah - I went there.

No, live theater didn't kill me.  Not really.

Email ThisBlogThis!Share to TwitterShare to FacebookShare to Pinterest
Labels: Theater

I still can't believe that somebody thought that Wedekind's book would make a musical. For over 110 years, the impulse was resisted -- for good reason.

"Tell that to Lincoln." I'm still laughing. I had to re-read the rest of your post twice because I was focused on that.

I don't care for the hype of Broadway shows either. A few years ago, i was in nyc on business and decided to give it a try, so bought half price tix to see, yup Spring Awakening, starring pre-Glee Lea Michelle (sp?). I can't begin to tell you how many times i looked at my watch or resisted the urge to jump off the balcony. HORRIBLE. HATED IT. Somit wasn't just your local production. It's a crappy show. Yes i know it won a Tony for best musical. Hogwash