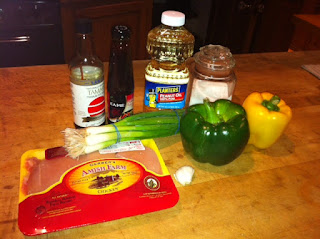 After one so-so attempt (the velveting of the chicken) and one that didn't go so well last week.  But now I'm back on track with Black Pepper Chicken that I snagged from Bo's Bowl.

You can get the recipe from his site, but it is super simple to make - even easier than those pre-prepared bags, and clearly it tastes better and it has to be healthier, right?

Ok, I had to make a few modifications, because, I am after all, me. Well, that and the store didn't have any red bell peppers!  What's up with that?  I also added scallions, because it's asian-themed cooking and who doesn't use scallions in that?  I also love them.

Oh and one more substitution I wasn't expecting  - the rice.  I didn't buy any at the store because, well, who doesn't have rice at home? Apparently we didn't. Oh, we had other kinds of rice, but nothing white. That's ok,

Anyway, prep was a breeze. Buying fresh veggies and oyster sauce took the most time. It takes no time to chop and even cook. We have no wok, so a 14" skillet worked just fine. 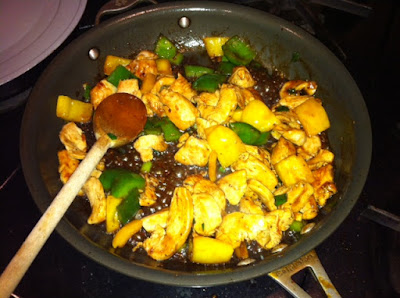 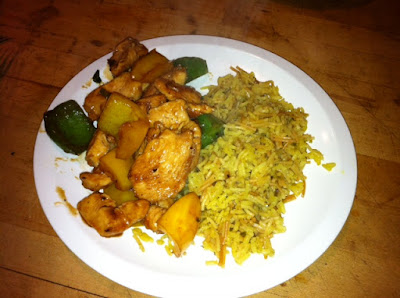 I do need to work on my food photography skills.

The taste of the dish was great.  2 tsp of ground black pepper, at first, seemed that it would overwhelm, but the balance of flavours was great. The sauce, while dark, was still light and blended nicely.

I know I can be a big eater, and while there was a little left over, this only served two - though I'm sure a dietitian would tell me it should have served four.

No offense to Mike and Peter, because I've used some of the recipes successfully, but Bo has never steered me wrong. I highly recommend anyone trying this dish.

"Velveting the chicken" sounds kind of dirty....but then again, I pretty much have the mind of a 12 year old. :-)

I luv Bo too and have had great success with his recipes. The best? His Greek Salad. I actually gave it as a thank you to my mom's nurses her Radiology and Chemo centers. I thought it would be better than the usual cookies or cake. They loved it and asked for the recipe.

Simple but tasty (spicy) chicken dishes are always good. And there is no such thing as too much black pepper, in my opinion.