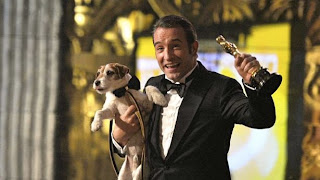 I'm sure you all know the winners and losers when it comes to grabbing a little gold statue for making movies.

A few weeks ago, I was challenged by Mike, over at his Short Attention Span Theater to gloat or admit failure depending on which one of us picked the most Academy Award winners.

I suppose we could run up to the stage together and wrestle for the mic.  I'm thinking people would be willing to pay to see that.

Other than that, there would be no clear winner - assuming we didn't resort to pulling pigtails and pinching or tickling each other until someone said 'uncle'.

I did not select potential winners in every category - just what I consider the nine major ones. Mike made selections in all categories.

Let's say, we go with comparing my selections and his for my categories:  It was a tie.

I had six.  Mike had six.  Erik (the only other participant) had one.

Mike and I had many of the same picks - differing only in original screenplay, actor, director and visual effects.  We met on solid ground with actress, both supporting roles, picture and adapted screenplay.  I made a rookie mistake:  rarely does best picture not get best director. I separated the two. Stupid, stupid me - or I would have walked away with the whole kit and caboodle.

However, if we went with Mike's total list, he did score seven more, but BOMBED on seven others (sorry,  it is my only chance to gloat even a little).

He was a good sport about it all. More so than myself.  I hate to lose. Technically I didn't, but I didn't win either.

Still, I stand in good company and happy to play along with his contest.  I look forward to next year, knowing I will do a better job.  I'd almost have to - right?  But congrats too all the participants.  All three of us.


(on a side note - aren't Jean and Uggie just so fucking adorable??)

Song by: Christine McVie
Posted by Blobby at 7:51 AM

I'm surprised I even got one. Trust me on this.

Then again, so are most Oscar winners.

"I'd like to thank God, the Academy's Board of Governors, and Rick Perry for this award..."errrrr....wrong speech. You are a gracious winner/loser, Blobby. And I very much look forward to next year's contest. Wrestling for the microphone? How uncivilized!