I wasn't in the mood to post anything new; anything with much though to it.  I mean, why change course now?

Actually, yesterday morning I had a thought about something to post about for today. Maybe it was politics, maybe it wasn't. I honestly don't have a frickin' clue.  Damned short-term memory.

Anyways, I thought I'd give a slight progress report on the construction project. It's going ok.  We are on week three.  Four more to go.

I'm not showing you everything, that will be for future post or at least the final construction post.  You're getting a corner. 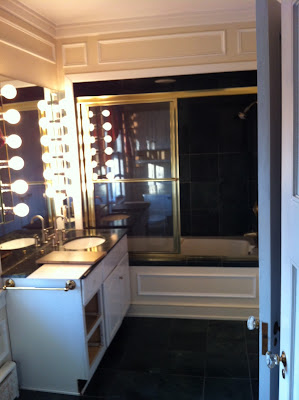 This is the before. I call it the Linda Evans bathroom.  Dark green marble on the walls and floor.  Gold packaging. And lots and lots of globe lights.  F'ugly from the word "go".   ...and only one sink. 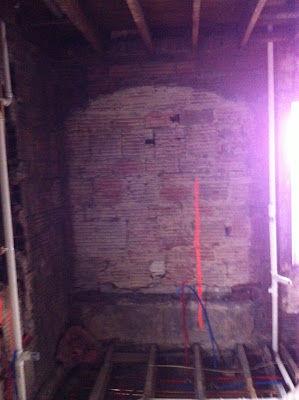 Gut job.  Same corner. Honest.  Note the lack of insulation. Or beams. They didn't exist. Plaster when directly onto the brick walls. 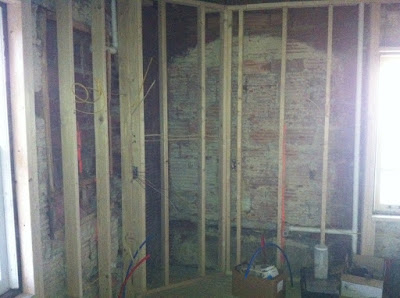 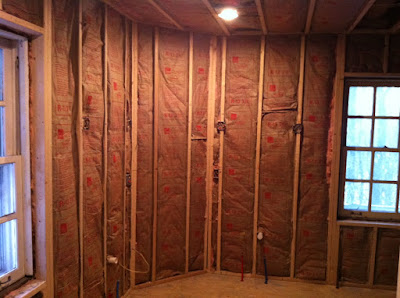 Insulation installed. The window on the right is "new".  It was always there. The former owners boarded it up - we not entirely sure of the rationale on that. Since it was boarded up on both sides, it was very well preserved. We're big on light. 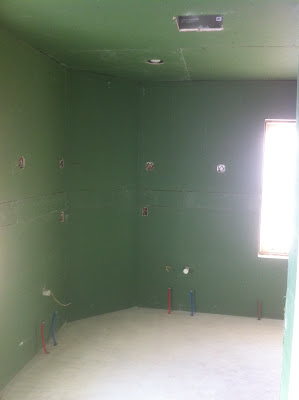 Now we have walls.  They are not taped, mudded or sanded.....yet, but hey, they're up.  And green board is new to me. I know of blue board, which will go in the shower, but green?  Apparently it keeps the walls in good condition if there is a lot of steam in the room.  You don't want that moisture ruining the walls.   There will a sink on each wall.

The next update will probably be once the rooms are finished, but you should at least get a sneak peek.

Email ThisBlogThis!Share to TwitterShare to FacebookShare to Pinterest
Labels: Construction

you are correct; fugly bathroom is fugly. can't wait to see what it becomes; and YAYZ for an uncovered window!

I don't understand why you tore out the old bathroom. Those lights are a drag queen's dream come true.

Yes, but what kind of TILE did you pick?

it will soon be fabulous. be patient!

Very impressed. I think of hanging a picture on the wall as a home improvement project.

What was with the white arch shaped area on the original wall? Do you know?